Two vacant seats in the US House of Representatives have been filled overnight, in the last of four special elections to replace Congressmen appointed earlier this year to President Trump’s government.

All four electoral districts had long been safely held by the Republican party. After three months of strong media attention, and astonishing levels of electoral expenditure, all four have remained in Republican hands.

But only just. The four districts saw the established Republican candidates win vote shares of between 56% and 62% at last November’s elections.

The new Republican members elected in recent weeks, however, have won with vote shares between 51% and 53%.

The close results are highly likely due to different turnout motivation levels, as much as voters actually switching parties.

Across these four districts the number of votes cast for Republican candidates in the special elections has been just 52% of the total seen at last November’s elections.

The equivalent figure for Democrat candidates was 73%, and was substantially higher than the Republican level in all four contests.

In ordinary circumstances the Democratic party, and most political observers, would hardly have considered these districts contestable. But the unfolding drama of US politics this year meant that serious challenges were mounted in each contest.

The Republican party currently enjoys a majority of 24 seats in the 435-member House, so none of these outcomes would have affected political control of the Congress.

But Democrats, with an angry and motivated base and vigorous donations flowing in, were hoping for symbolic and morale-boosting wins.

Republicans, weighed down by the President’s low popularity and a series of political controversies in Washington, simply needed to survive the encounters.

The election for the 6th district of Georgia, decided overnight with Republican Karen Handel defeating Democrat Jon Ossoff, attracted the greatest level of campaign donations for a single House district contest ever recorded, at around $50 million overall.

Handel won the seat with only 64% of the votes her party won last November, while  Ossoff was supported by 92% of the number of Democratic voters from last November. The result was a 53%/47% margin of the votes counted last night. 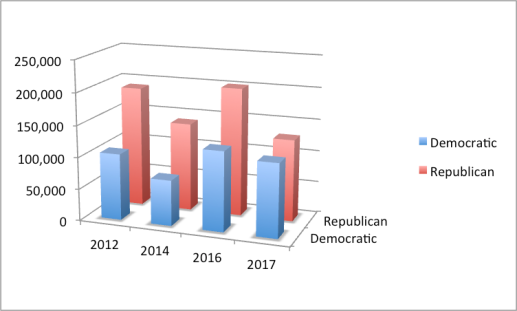 Ossoff almost snatched the Georgia seat several weeks ago, in the primary round of voting held on April 18. Winning 48% of the primary votes, he fell just short of the 50% mark which would have handed him the seat without needing the final round of voting.

In the elections for the seat in the 4th district of Kansas held on April 11, just 38% of last November’s Republican vote was achieved by new Congressman Ron Estes, while 68% of last year’s Democratic vote supported his challenger.

Votes in the Kansas’ 4th House district 2012 to 2017: Republican turnout was also massively down, nearly losing the seat

On May 25 the new Congressman for the single district representing Montana, Greg Gianforte, scored 66% of the vote his predecessor won last November, while his Democratic challenger won 81% of last year’s Democrat votes. Gianforte attracted national attention by assaulting a reporter a few days before the poll.

Votes in the Montana House district 2012 to 2017: once again, sharply reduced Republican voter turnout nearly lost them the seat

Despite the apparently safe South Carolina race being largely overlooked by observers, Norman has had a narrow escape. Just 28% of his party’s 2016 supporters turned out for him, while 40% of last year’s Democratic voters turned out, leading to Norman winning by just 2,800 votes. 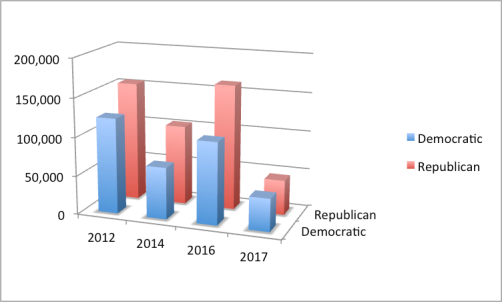 Votes in the South Carolina 5th House district 2012 to 2017: the closest of these four races, with Republican turnout at only 28% what it had been last November

Low voter turnouts are normal for special elections to fill House vacancies. Indeed, the turnouts seen this year are probably higher than might normally have been anticipated, driven by heightened political engagement resulting from the Trump presidency.

Republicans will be breathing a massive sigh of relief after last night’s two wins. The Georgia contest in particular had become almost a referendum on the Trump administration and Republican control of congress.

Democrats will be disappointed, not least because they have blown a staggering amount of donor funds. They are also highly unlikely to win these four districts at the next national elections on November 2018, when general voter turnouts should return to normal (mid-term) election levels, and campaign funding returns to normal levels for these seats.

However the season’s honours are divided in terms of political psychology. The Republicans won all four seats, but they were contests in safe districts which really had no business being so competitive.

The Democrats can take heart that they have bruised Republican confidence leading up to the 2018 elections.

To win back control of the House, Democrats need to win 24 seats from Republicans. A net nationwide swing of around 6.2% of vote shares (closing apparent 2016 result gaps of double that number – around 12.3%) will do that for them.

All of the four districts contested in the special elections in recent weeks had Republican margins of safety well out beyond that target.

The vote share swings compared to November 2016 results required to win these four districts were around 8%, 10%, 12% and 15% – yet the Democratic challengers all came close.

Nonetheless, the recent special election results were probably only made as close as they were by the differences in partisan turnout motivation. The circumstances were not typical of a general election.

Had the Democrat challengers won any of these contests it would have been remarkable; their failure to do so does not indicate Republicans are travelling well.

On the contrary, the clear evidence of underlying motivational advantage for Democrat candidates will loom over preparations for November 2018, boosting the Democrats’ prospects of attracting prominent candidates, community support and financial donations.

American political observers will be pawing anxiously at their spreadsheets for a year or more, trying to determine what these special elections signify.

One additional special election was held for a Californian seat vacated earlier this year by a Democrat congressmen, Xavier Becerra, who resigned to become state Attorney-General for California. However the contest to fill the seat for the state’s 34th congressional district, finalised on June 6, was hopelessly one-sided.

19 Democratic candidates nominated, together with a single Republican, Libertarian and Green candidate each.

In the initial ‘jungle primary’ round of voting, only a paltry 28,000 votes were cast.

Democrat candidates filled the top six places, with the Republican placing 8th – behind the Green candidate – with barely 1,000 votes.

The final round of voting was contested between the top two primary vote-winners – both Democrats – with Jimmy Gomez becoming a member of Congress by winning just 19,000 votes.

Congressman Gomez will have easily the lowest voter mandate of any member of Congress.

Ralph Norman, newly elected congressman for the 5th district of South Carolina (above), is another low-mandate winner, taking his seat with just under 45,000 votes. Ron Estes won the Kansas seat on 63,000 votes.

At the 2016 elections the number of votes cast for winning House of Representatives candidates varied from as low as 70,000 up to 322,000 votes, illustrating the dramatic variation on voter influence in electing the members of the House.

Another vacancy House seat has recently arisen, this time in Utah. The election will be finalised in November 2017.

This seat has a 75% Republican vote share in November 2016, well above the partisan margin of safety seen in the four recent contests, so expectations for a Democratic win will be very low.

One comment on “Republicans hang on to four House seats”

This entry was posted on June 21, 2017 by Malcolm Baalman in Current issues, Election results, United States, US House of Representatives.