Boilover in Alabama: Half of traditional Republican voters stay home

Jones polled 49.9% of the votes to Moore’s 48.4%. All US Senate elections are decided by the simple plurality of votes [see comment below].

While Jones was a strong candidate, the contest had turned largely on the character and conduct of his opponent, Roy Moore.

Prior to the campaign Moore was known for a range of controversies including applying his highly conservative religious views to his judicial responsibilities, his strident denunciation of homosexuality (which is protected by the US Constitution), and for twice being removed as Chief Justice of the state for defying principles of US constitutional law.

But then during the recent campaign multiple and credible allegations emerged that Moore, 70, was also a child molester, having repeatedly propositioned underaged girls when he was in his 30s. At least one accusation alleged physical sexual activity.

Moore denied the allegations – initially in an equivocal manner, arguing that the Bible endorsed men having sexual relations with young girls. He and his campaign supporters later attacked the credibility of his accusers.

President Trump, the Republican National Committee, and other conservative forces and media expressly recommended that an alleged sexual offender was more suitable to serve in the Senate than the Democratic candidate.

The controversy has also seen what is now the standard US media division of opinion, with conservative-favouring media rejecting outright the claims against the Republican candidate.

As the campaign finished, Moore was also revealed to have made remarks that America was last ‘great’ when slavery was still being practiced.

Jones’ election to the Senate is historic, as Alabama voters have not elected a Democratic candidate in any statewide election since 1992.

Today’s result seems to have occurred largely because half of the normal Republican voter base refused to turn out to support Moore.

Alabama’s election turnouts are typical of US elections – around 60% turnouts in presidential election years and around 40% in mid-term elections.

One-off special elections in the US – such as this contest – typically see turnouts even lower than 40%.

In presidential elections over the past decade, voter support among Alabama’s 3.6 million eligible voters has averaged just under 1.3 million votes for Republicans (amounting to 35-38% of the eligible electorate), with Democrat candidates polling around 770,000 votes (20-24%).

In mid-term elections the support levels are around 880,000 for Republicans and 515,000 for Democrats.

But on tonight’s election results – which may rise slightly – only 650,000 voters have backed the Republican Moore, while 671,00 backed Jones.

That means the Republican vote today was just 50% of its average presidential year result, while the equivalent Democratic figure was 87%.

In those special elections the actual number of votes cast for Republican candidates was just 52% of that seen at the 2016 elections. The equivalent figure for Democrat candidates was 73%.

Taken together these results indicate a sharp differential in Democratic-vs-Republican voter electoral enthusiasm this year, with the Alabama result appearing to be the strongest of all.

However, mixed in with voter turnout by partisan supporters will be some degree of outright cross-over of swinging voters. 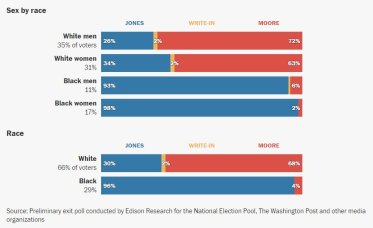 Results of the 2017 special election for Senator: Alabama voting is starkly polarised by race

[Update: There has been some post-election commentary that the 29% of voter turnout at this election being black voters is a historic level of support, exceeding the 28% black voter share supporting Barack Obama for President in 2008. The data here can be misinterpreted. Actual voter turnout at this election is clearly significantly lower than the average participation at recent presidential elections, including that of 2008. But black voter turnout yesterday was less reduced than that of white and other voters. So at this election, black voters made up the highest proportion of participating voters – 29% – at any Alabama election. However in absolute numbers, it is quite certain that more black voters turned out to vote for Obama in 2008 than turned out for Doug Jones in 2017.]

The election result will impact immediately on American politics, with the Republican party’s grip on the US Senate dropping from 52 members out of 100 to 51.

The Republican party lost its attempt to repeal the US Affordable Care Act a few months ago due to the refusal of 3 party senators to join the effort. After Jones is sworn in in a few days time, the party will be at the mercy of just 2 defectors on any hyper-partisan issue. [Update: the Alabama Secretary of State has indicated that the certification of Jones’ election will not be completed until December 27-28, and he would be sworn in on about January 3.]

The passage of the massive and controversial Republican tax legislation currently before Congress is the most immediate project imperilled by the Alabama boilover.

The Alabama result will alarm Republicans across the nation, warily eyeing the 2018 midterm elections now just 11 months away.

Party primary election processes starting in the new year will likely see an impact on the decisions of incumbents seeking re-election, the emergence of primary challengers and the choices made by primary voters.

Doug Jones will serve as a Senator for roughly three years, and will face re-election in November 2020.

In recent decades, Alabama has not been a state with close electoral contests. It is one of the Republican party’s strongest regions.

But the apparent consistency of the statewide vote in Alabama masks stark variation in electoral turnout.

The full vote-eligible population (“VEP”) of Alabama is around 3.6 million people, slowly edging up with population growth.

Measured against this base, in presidential election years the Republican party has received the support of between 35% and 38% of the electorate in the past decade, while the Democratic party has won between 20% and 24% support.

Until 2017 the state’s US Senate delegation went without turnover for over twenty years.

The senior Senator, Richard Shelby, was first elected in 1986, and has been re-elected four times.

Shelby was originally elected as a Democratic party candidate, but switched his affiliation to Republican in the 1990s.

Until 2017 the other Senator was Jeff Sessions, first elected in 1996 and re-elected three times, most recently in 2014.

Sessions resigned in January to become Attorney-General in the Trump Cabinet.

Sessions’ place was temporarily taken by Senator Luther Strange, appointed in February this year by the state’s Governor.

But Senator Strange lost the Republican primary to Roy Moore, and will leave the Senate in the next few days.

Electoral contests for the seven US House of Representatives delegates from Alabama also lack competitiveness.

Six of the seats are ultra-safe for their party – 5 Republican and 1 Democrat members – while just one seat – the 2nd district – is seriously contestable.

Three of the seven House seats did not even have a challenger from the minority party in 2016.

2 comments on “Boilover in Alabama: Half of traditional Republican voters stay home”

This entry was posted on December 13, 2017 by Malcolm Baalman in Current issues, Election results, United States, US Senate.