The first of five special elections to replace departing US Congressmen has seen over half of Republican party voters stay home. But who will take over Frank Underwood’s old seat in May?

Republican candidate Ron Estes will be the new representative for the 4th district of Kansas in the US House of Representatives, based around the city of Wichita.

After all being re-elected in last November’s national elections, five members of the House have quickly resigned to take up executive offices.

Despite their normally low profile, political analysts are closely examining the implications of the by-election votes for US politics.

Four Republicans are entering the Trump administration in senior roles. Mike Pompeo – the departing Kansas congressman – is now Director of the CIA.

Montana’s Ryan Zinke has left to become Secretary of the Interior, and Georgia’s Tom Price is now Secretary of Health and Human Services.

Mick Mulvaney – one of the leading members of the controversial Freedom Caucus group of hardline conservatives – has become Director of the Office of Management and Budget.

A fifth congressman – Democrat Xavier Becerra – has left to take up the role of California Attorney-General.

All five seats are filled by ‘special elections’, in the US terminology, with the Kansas vote earlier this week being the first.

While the four Republican-held seats all have the appearance of safe seats, Republicans are mightily relieved that they survived the Kansas vote. The party, picking up danger signs in late polls, spent heavily at the end and rolled out President Trump and other leading figures to contribute to the campaign.

Insurgent Democratic candidate James Thomson, inspired by 2016 presidential candidate Senator Bernie Sanders, won 45.7% of the vote to Estes’ 52.5% – far closer than any recent partisan vote difference in this district, which is accustomed to Republican results of 60%-68% of the vote.

The cause of the ‘swing’ however, is not voters changing sides, but a dramatically low turnout of just 120,000 voters.

Based on 2016 state total of just over 2 million voters divided into four districts, the 4th Kansas district should have around 515,000 eligible voters. While not all of these citizens will be actually registered to vote, this week’s effective turnout rate is still around a mere 23% of eligible voters.

By contrast last Tuesday only 63,505 voters – just 38% of the November election count of Republican supporters – showed up to back the new candidate Estes.

On the other side 55,310 Democratic voters, 68% of the November tally, participated.

The Democrat vote was also down on November’s figure, but the relative difference turned the contest into a close result.

The five by-elections are all being held in safe seats, and voters known they won’t affect the overall control of the Congress, so low voter turnouts are to be expected.

But the results in the five by-elections will reveal the relative passion in the electorate, and have implications for the policy directions of both parties.

The low turnouts also reveal a legitimacy gap for the replacement members, adding to the wide varieties in voter support across the House as a whole. 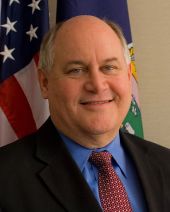 Estes will sit in the House of Representatives as the choice of just 63,500 US voters, whilst the average support for his 434 colleagues will come from around 194,700 voters.

Estimates of the total eligible voter populations across the 435 House districts range from just under 400,000 voters in the two Rhode Island districts to over 800,000 in the Montana district.

Montana, the most populous of seven small-population states that are eligible for just a single seat in the House, frequently has the largest registered voter list.

Last November the least-supported member elected to the House was Louisiana congressman Mike Johnson, winning with just 70,580 votes – less than a quarter of those who elected Evans in Pennsylvania.

Turnout variations affect what is already a serious inequality of voter influence. In the 2016 full presidential-year election turnout rates varied across the 50 states from 42% in Hawaii to 74% in Minnesota. The national average turnout last November was 60%.

In mid-term elections turnouts are much lower. The immediate past House elections of 2014 saw the lowest turnout rate since women won the vote universally in the 1920s – a pathetic 34% of voters – with the sole exception of the war-affected mid-term election of 1942.

But in the tense political circumstances of the early Trump administration, with Republican performance in Washington proving a disappointment even to its supporters, the result has political implications.

If a trend emerges for upcoming elections that Republican supporters will stay home but that Democrats are motivated to keep voting, at least at relatively higher rates, nervous Republican legislators may become even less receptive to the agenda of the President and congressional leaders.

Of the three other Republican by-elections to follow in the weeks ahead, all will be watched anxiously for signs that the Republican brand is damaged, and for implications when the next full round of elections is held in November 2018.

Next up is the primary in the 6th district of Georgia. The seat – once held by legendary southern Democrat Carl Vinson (member of the House from 1914 to 1965), and more recently by highly conservative Republicans Newt Gingrich (1979-1999) and Price (2005-17) – extends from the northern suburbs of Atlanta out into rural areas.

Under Georgia’s form of runoff voting, 11 Republicans, 5 Democrats and 2 independents will be on the first ballot on April 18. If any one of them scores 50% of the vote – a highly unlikely outcome – they go straight to Congress. If not, the top two candidates face a runoff election on June 20.

Democrat Jon Ossoff is the clear leader of his party’s 5 candidates. Of the 11 Republican candidates 3 or 4 have significant prospects, but there is no clear leader.

Polls – which are exceptionally unreliable in low-turnout elections – indicate that the runoff contests between Ossoff and the four most prominent Republicans are all within a few points of each other – with the Democrat candidate actually ahead in three of the matchups.

An even more surprising possibility, if the Republican vote is both very low and very divided between the 11 candidates – would be Ossoff and a second Democrat winning the top two places to go into the runoff.

The vote in the sole district in Montana will be held on May 25.

Montana is a politically complex state, its voters being safely Republican in presidential contests but well capable of electing Democratic congressmen, senators and governors.

The 2017 contest will be between businessman Greg Gianforte for the Republicans and musician Rob Quist for the Democrats.

Thirdly, there is the election to fill the 5th district of South Carolina, previously held not only by new Budget Director Mick Mulvaney but also by House of Cards’ Frank Underwood.

In the plot of House of Cards Underwood, a southern Democrat, was elected in the district from 1990 to 2012, rising to the rank of Majority Whip in the House before scheming and murdering his way to the White House.

The South Carolina contest will be a one-round affair, with final voting on June 20. Parties will select their single candidates at primaries on May 2 (and also May 16 for any runoffs).

Finally, the replacement for Democrat Xavier Becerra for the safely Democratic Los-Angeles-based 34th district of California will certainly be a Democratic congressman.

At the all-party primary round on April 4 just 28,000 votes were cast, but the top two candidates were Democrats Robert Lee Anh and Jimmy Gomez; the sole Republican entrant won just 3% of the vote. The two Democrats will face off in a final vote on June 6.

This entry was posted on April 13, 2017 by Malcolm Baalman in Franchise and turnout, United States, US House of Representatives.