Only 1 in 3 Australians will influence election of House

Australian voters will elect their national House of Representatives and their Senate this weekend.

In electing the House – where governments are formed – around two-thirds of voters will have virtually no influence, as they live in ‘safe’ seats where the result is regarded by campaigns and commentators as a foregone conclusion.

The domination of most electoral divisions by the two major Australian political parties provides representation for the majority viewpoint, but leaves the local minorities unrepresented in the House, and deprives all voters of a meaningful choice.

Despite a sound system for regular review of the division boundaries, variations in enrolment numbers compound the problem.

Of the 150 seats in the House, an estimated 46 seats are already being conceded by pundits to the opposition Labor party, while around 52 seats are being conceded to the governing Coalition of the Liberal and National parties.

While surprise results do occur, only an estimated 37 seats – just 25% of the seats in the House – are broadly considered to be competitive between the two major parties. 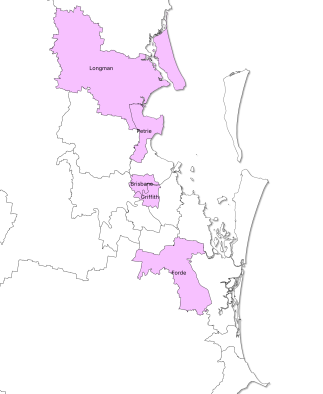 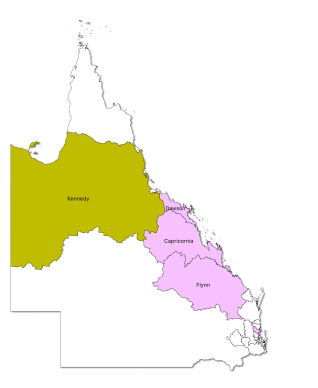 Queensland has an estimated 8 marginal seats (pink)- 5 in the city of Brisbane and 3 in regional Queensland – and one regional seat, Kennedy (gold), where long-term independent Bob Katter will be a finalist

This election campaign will see another 15 cases where significant nominations outside the main parties have made divisions competitive.

The rise of Senator Nick Xenophon’s NeXt party has turned at least three seats in the state of South Australia competitive.

NeXt is polling at around 25% of the state electorate, which in many electoral systems would see the party win around 3 of the state’s 11 seats. However Australia’s single-member electoral division system works against such proportional outcomes.

But if the state electorate’s growing embrace of the new party approaches 30%, and if the vote is concentrated in particular areas, wins for NeXt in single-member divisions are looking increasingly possible.

Polls show NeXt running in a finalist position in the large outback division of Grey and also in the divisions of Mayo and Barker. 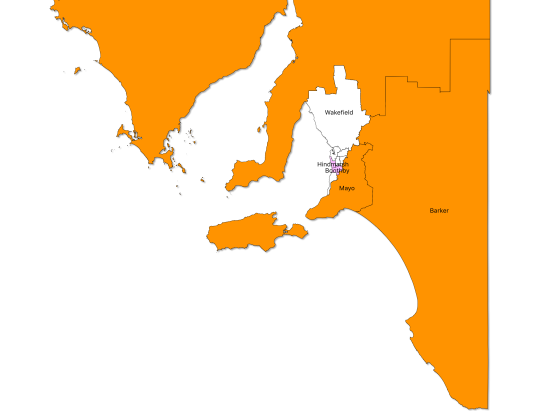 In South Australia, two Adelaide seats are Labor-Liberal marginals (pink), but at least three seats – and possibly more – have been made competitive by the new NeXt party’s rise (orange) 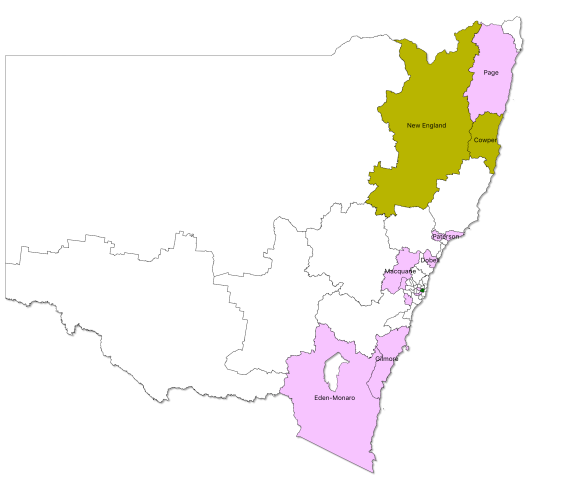 The contest in the division of New England between long-term former member Tony Windsor and sitting member, Deputy Prime Minister and National Party leader Barnaby Joyce is one of the marquee races of the election, attracting constant national media attention.

On the north coast of New South Wales, a last-minute run in the electoral division of Cowper by former independent House member Rob Oakeshott has rocked the National Party and political commentators, with polling showing the contest at almost 50/50 against the sitting member. 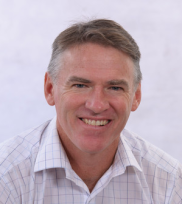 Even by running, Oakeshott has brought a renewed political focus onto his electoral division.

When Oakeshott and four other members of the House held the balance of power in the 2010-13 Parliament, government attention to his electorate – and to regional Australia generally – rose sharply.

Mayne’s slogan aptly identifies the key issue: without a real contest occurring, single-member division elections matter little to the national election result. Only a close contest attracts campaign attention by the governing parties, and gives influence to the political views of local voters. 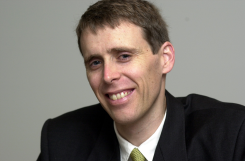 Mayne’s campaign as a “real liberal” against the socially conservative Andrews also raises directly the issue of how hard it is for voters to influence national policy when they live in safe seats.

Mayne argues that if elected he will give his support to keeping a Turnbull-led Coalition government in office – which should give comfort to the general mood of the electoral division’s voters – but that he will act as an independent member to take a ‘moderate liberal’ approach to policies and issues.

Preferential voting, universally used in Australia (but in few other countries), makes such a campaign possible, and in doing so gives voters greater choice of political representation. 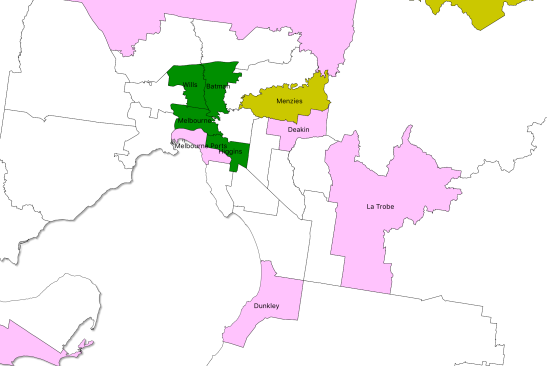 Independent candidate Stephen Mayne has given voters in the metropolitan Melbourne division of Menzies (gold) a real influence on the election, and on national policy

On early campaign polling Mayne is anticipated to run third in Menzies behind the ever-losing Labor party candidate. To win the seat, Mayne must either overtake Labor’s candidate and run second on first preferences, or else run at least third, receive preferences from Green party voters and the four other independent candidates, overtake Labor during the count of votes, and ultimately overtake the sitting Liberal member.

Based on the historical examples of the very limited number of wins from third place (on first preferences), Mayne should need around 20-21% first preference votes to get a realistic start.

Tasmanian independent Andrew Wilkie won his seat from third place at his first successful election in 2010 with a first preference vote of 21.2%. (Wilkie then improved his primary vote in 2013 to 38% to win a second time.)

Of course, Mayne also needs to win support directly from previous Liberal voters, and reduce the sitting Liberal member’s vote well below 50% at the start of the count.

In this situation, what Mayne needs most (after first preference votes, of course) is not merely to win over Labor or Green voters. He also needs voters who would normally vote Liberal to choose to vote for other minor candidates to then preference Mayne above the Liberal candidate.

Nationwide, polling suggests that at least two independents – Andrew Wilkie in Hobart and Cathy McGowan in northern Victoria – are highly likely to be re-elected. At least three others – Bob Katter in north Queensland and Tony Windsor and Rob Oakeshott in the New England region of New South Wales – are in close contests.

Needless to say, any one of the many other independents running for election across Australia could surprise the pundits, as Andrew Wilkie did in 2010.

Australia’s current third largest political party, the Greens, are also in the running for House seats, despite the structural disadvantage of the single-member division system.

Greens MHR Adam Bandt has twice won the Melbourne electoral division for the party, and this weekend the party is widely expected to place in the top two candidates in four inner-Melbourne seats and two inner-Sydney seats. 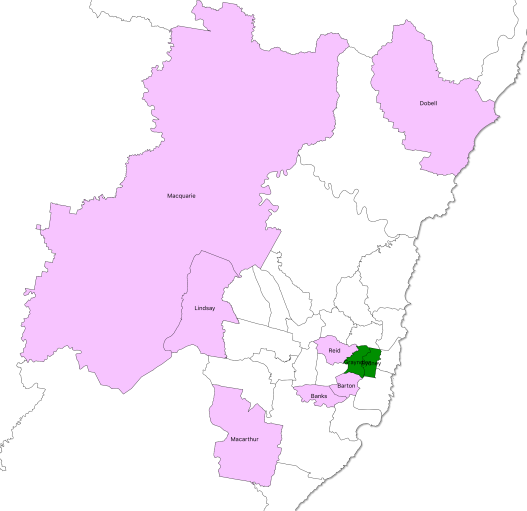 Sydney and its outlying areas has around seven Liberal/Labor marginal seats (pink), and two where the Greens should be finalists (green)

Perhaps the most politically significant Greens contest in 2016 is the one where they might win a seat from the Coalition, rather than from Labor, in the inner-south Melbourne division of Higgins. 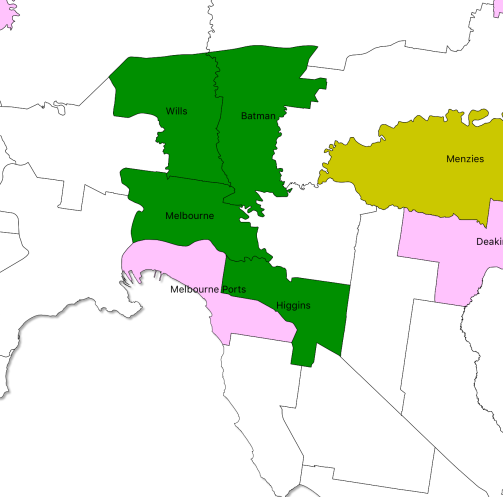 The Greens should run at least second in the inner Melbourne seats of Wills, Batman, Melbourne and most likely Higgins

The Greens have yet to win a suburban ‘Coalition’ seat at state or federal level, but Higgins is an unusual electoral division. Half the federal division covers the same communities as the state division of Prahran in which Labor and the Greens won around 25% each at the 2014 state election, with the Greens overtaking Labor on other preferences and going on to defeat the Liberal candidate – who started with nearly 45% of the vote – to win the seat.

Higgins also includes some normally safe Liberal suburbs, but the lack of Labor votes there may actually help the Greens to run second. If they do so, the final result could be close.

The Greens’ rising vote has also made the division of Melbourne Ports, with suburbs somewhat similar to Prahran, a marginal area in which the Greens might possibly run second.

At the NSW state level, the Greens astonished pundits in 2015 by winning a Legislative Assembly seat in Ballina, in the north-east of the state, previously held safely by the National party, and almost winning a second. 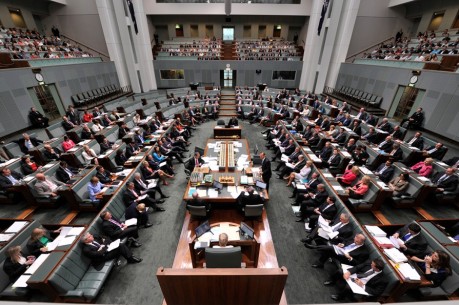 The Australian House of Representatives

If on July 2 the balance of Labor and Coalition seat wins is close, and if Australians elect three or more independents, together with between one and three Green members, and up to three NeXt members in South Australia, a second hung parliament emerges as a real possibility.

The 2010-13 Parliament is controversial among Australia’s political commentators. The Coalition parties – left in opposition during the term – bitterly condemn the period. Others point out that the Parliament served a full term, passed a broad range of economic and social legislation, and brought a range of improvements to the system of government.

The hung Parliament’s 2012 creation of the Parliamentary Budget Office is credited with major improvements to the policy-making processes in Parliament and with changing the manner in which the main parties cost promises when they campaign for election.

In the late weeks of the current election campaign most polls suggest that the Coalition has a concentration of support in the marginal seats sufficient to win the election by around half a dozen seats. Most pundits and most polled voters now expect a Coalition win.

But the mood of a solid share of the electorate is surly towards both major parties – Australia’s relatively mild version of the world-wide trend to turn away from trust in established political parties and institutions.

If voters approach this weekend’s poll unexcited by the prospect of a change of government and with an unenthusiastic general anticipation that the Coalition will win again, a protest vote for a minor party or independents may be a satisfying option for many.

A protest vote by just a small percentage of voters, especially if it is significant in the seats where minor parties or independents are realistic prospects, could once again give the nation a House of Representatives not controlled by the governing party.

But perhaps the real democratic issue remains that less than a quarter of Australians will have a meaningful role in determining this outcome.

Only those living in an electoral division with an independent or minor party finalist, or with a close major-party marginal situation, will have real influence on the national outcome.

This entry was posted on June 29, 2016 by Malcolm Baalman in Australia, Current issues.