Independents could win in divided communities

With polling suggesting that Australians will vote for minor parties and independents at record levels in today’s election, records may also fall for the lowest first preference vote that goes on to win a seat in the House of Representatives.

Australia’s preferential voting system makes wins from low starting votes possible. As minor candidates are eliminated during the counting of votes, their ballots transfer to stronger candidates in the order directed by each voter.

The preferential voting method gives Australian voters the highest level of choice of any of the world’s single-member division systems.

Almost all the single-member voting systems in the world use the plurality (or ‘first-past-the-post’) method, where the seat is simply awarded to the highest-placed candidate, often with well under 50% of the vote.

The plurality system does not account for the possibility that a majority of voters might oppose the plurality winner being their representative. Using voter preferences and eliminations in the vote counting allows more candidates to run without making an unpopular first-past-the-post result possible.

France uses a two-round runoff system; if no candidate scores 50% of the first preference votes, the highest-placed two candidates go to a second election a week after the first.

In Australia’s system – in use since 1919 –  there have been rare cases of voters winning from third place on the first preferences. 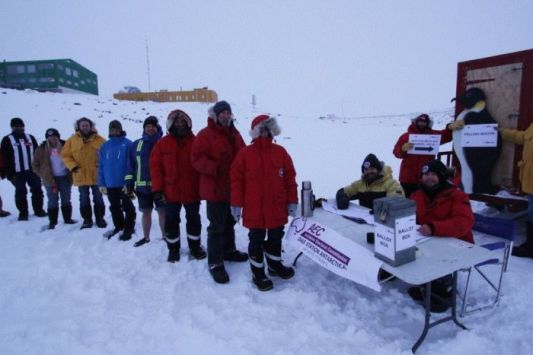 Voters queue to vote at Australia’s Davis Station in Antarctica; in July 2016 more than 1 in 4 are expected to give their primary vote for a non-major party or independent (image: Australian Antarctic Division/ABC news)

The Australian House of Representatives record for winning from a low start on first preferences is held by Country Party candidate Arthur Hewson, who won only 16.6% of the first preference vote in the division of McMillan, in eastern Victoria, at the 1972 election.

But Hewson received enough preferences from the ballots cast for the Democratic Labor Party candidate (7%) and an independent (6%) to get ahead of the Liberal party candidate. When the Liberal was then eliminated, the preferences on those balances were enough for Hewson to overhaul Labor’s candidate and win with 52% of the overall votes.

The lowest starting vote by an independent to win a House seat was the result for Andrew Wilkie in the seat of Denison in 2010. On the initial count of ballots Labor’s candidate was in third place on 35% of the vote, with the Liberal candidate on 22%, Wilkie in third place on 21%, and the Greens candidate on just under 19%. Preferences from voters who had first voted for the Greens candidate lifted Wilkie to second place, before preferences flowing from Liberal voters lifted Wilkie to win.

But wins from such low votes have been rare. Independents have won House seats with a starting vote of less than 30% on just seven occasions. Successful independents usually start with votes well above 30%, and are in first or second place from the beginning of the vote count.

In Australian elections, independent and minor party candidacies also allow voters to express their real preferences even if the final result is still a win by a major party (Labor of Liberal/National Coalition) candidate.

Australis’s electoral contests are steadily becoming more vibrant, with total votes for the Greens party and for independents predicted to exceed 25% for the first time at today’s national election.

Voters are required to fill out preferences for every candidate nominated in their House electoral division.

This entry was posted on July 2, 2016 by Malcolm Baalman in Australia, Current issues.