UK Election 2017 – Who gets represented in British Parliaments?

The House of Commons in Britain’s Parliament is meant to represent all the nation’s people.

It doesn’t. The House just ended, elected in 2015, represented just 33% of registered voters. Today’s election will hardly change this figure.

Because of the combination of a system of MPs each elected in single member districts, and the voting rule which allows wins with only a plurality of the votes cast, just on 50% of those who voted in 2015 were not represented in the election results.

Britain has an election turnout rate where only two-thirds of registered electors actually vote.

In any case the nation’s electoral registers do not include all possible voters – although modernized administrative procedures and campaigns to enroll young people will have almost certainly made the 2017 electoral registers the best Britain has ever had.

In the last House of Commons, elected in 2015, sat the representatives of 8.4 million conservative voters, but they did not come from all over Britain. Around 2.9 million Conservative supporters in Scotland, much of Wales, many northern English localities and much of London were not represented in the Conservative party room. 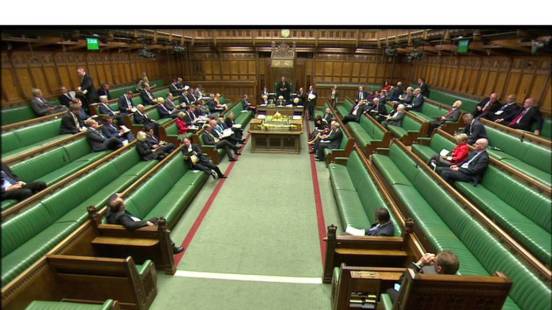 The Commons – representatives of only a third of Britain (image: BBC)

All the other Conservative MPs, drawn from very different demographic communities and without any accountability to these minority Tory supporters, are collectively supposed to speak for these people’s needs and opinions.

Of the 9.3 million Labour supporters who voted across the nation in 2015, around 5.0 million had real representatives in the House; the remainder did not.

From 2015, all but 19,000 of the 3.9 million people who wanted a UKIP representative, 2.3 million of the 2.4 million Liberal Democrat supporters, and almost the entirety of the nation’s 1.1 million Green supporters had no representation in the Commons.

Half of Scotland – 1.5 million Labour, Conservative, Liberal Democrat and other voters – also had no representation in London. Apparently the MPs of the Scottish National Party – MPs that almost all of these voters manifestly opposed – could speak on their behalf.

Some observers try to make the argument that everyone is ‘represented’ in the House simply because everyone lives in some constituency, and there is a local MP. This claim simply distorts the meaning of the word represent.

If representation means anything, it must mean that an MP in parliament was deliberately chosen by a group of voters to raise the issues that concern them, argue the cases they believe in, and vote the way they would wish.

To argue that a conservative resident of Islington in inner north London is politically represented by the local MP – Jeremy Corbyn, the Labour party leader – is simply perverse.

On policy debates such as tax fairness and the rights of social minorities, can an MP represent in parliament, and vote in favour of, all of the diverse political viewpoints simultaneously? Of course not.

In regional areas where identity and not merely policy direction is a powerful issue, the claim of representation not chosen by the voters is even less logical.

Are local Irish unionist residents represented in the constituencies where the Sinn Féin candidates win at elections – and then decline to actually go to London and take their seats?

Are opponents of Scottish independence – who were proved to be slightly the majority in the 2014 referendum, and continue to lead in current opinion polls – represented adequately by MPs of the Scottish National Party? Under the current electoral rules SNP candidates won 56 of 59 Scottish seats in 2015 – and they look set to sweep at the lion’s share of Scottish seats again in today’s election.

And as for ‘representing’ those who were not even on the electoral register, or the 34% of registered people who did not vote in 2015 – for sitting MPs to claim to speak politically for such people is simply a legal and political fiction.

Sitting MPs may well provide a range of low-level constituency services for people living in their locality. Much of this work is about transactional dealings with government agencies. MPs provide this service every day, competently and mostly without political bias.

But that is not the same thing as real political representation in parliament, where what maters is raising social concerns, arguing different positions and voting to decide matters.

The 2017 election will, of course, produce a representation result similar to 2015 and all the preceding British elections. Around 33% of registered electors (which probably means just below 30% of all adult citizens) will be represented.

Perhaps the 2017 election turnout will be higher than 2015. But the resulting difference in representation will be marginal.

Perhaps the 2017 election will see seat winners with slightly higher average vote shares than happened in 2015, due to an increase in relative support for the two major parties. The difference will still be marginal.

This doesn’t need to be so. Other electoral systems create parliaments that represent far greater proportions of the populations.

The STV system used in Éire achieves representation rates of around 50%.

Several Australian parliamentary chambers use STV voting, founded on a system of comprehensive registration and compulsory voting. They result in representation rates of 70-80%.

And tiny Malta just elected its national parliament with a representation rate of about 89% of the electorate.

All these electoral systems drew their STV voting system from British origins. But at home, Britain still does not provide its people with effective representation.

Post#4: Far from equal: most British have little say over government

2 comments on “UK Election 2017 – Who gets represented in British Parliaments?”

This entry was posted on June 9, 2017 by Malcolm Baalman in Current issues, Franchise and turnout, Plurality (first past the post), United Kingdom.