With just days to go until the first round of elections for the next President of France, what could possibly go wrong?

The French are the world’s most prominent users of the two-round runoff voting method.

Not only do they use runoff voting to elect their national president – many other nations also do so – but they also use it to elect their parliament, the Assemblée Nationale. Only a fairly small number of nations – mainly former French colonies – do likewise.

The French elections are also a multi-day affair. Two rounds of presidential voting are taking place this Sunday, April 23, and then a week late on May 7.

But the nation’s governance involves an unusual arrangement, with both a prominent executive president responsible for national leadership, security and foreign affairs as well as a cabinet selected from, and answerable to, the Assemblée. 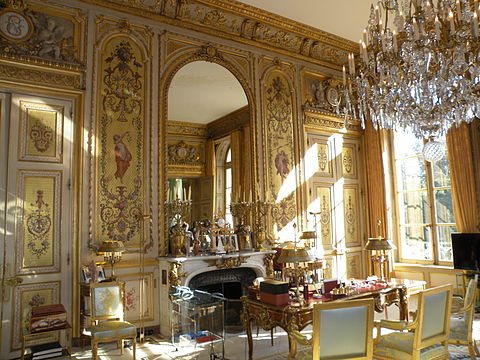 The gold-tinted office of the President of France in the Élysée Palace, Paris

The Prime Minister and cabinet manage France’s domestic politics, economic and social policies and the budget.

Sometimes France has had to work with ‘co-habitation’ governments; with a president from one political party and an Assemblée majority from another.

To minimise such situations, the French electoral system now arranges for the parliament to be elected a few weeks after the outcome of the presidential election is known. This year’s Assemblée elections will take place in two rounds to be held on June 11 and 18.

The race for the Élysée Palace has been unusually hot this year, with five major candidates fighting the contest for the last few months of the race.

For most of the history of the 5th French Republic, established in 1958, French politics has been dominated by two major parties, the Socialists of the centre-left and a centre-right party, recently renamed Les Republicans.

Only once since the 1958 Constitution established the strong executive presidency have the two final-round candidates for the post not come from these two dominant parties.

In 2002, the left and centre vote was divided between three candidates, and the right vote between two, creating the unexpected results that two right-wing candidates – sitting President Jacques Chirac and far-right candidate Jean-Marie Le Pen – won the final round spots. Chirac won the subsequent final contest in a landslide.

This year similarly has five key candidates, but the two once-dominant parties are nearer to the back of the pack. As in many other democratic nations, voters are giving up their historic support for established parties and looking for alternatives.

Of the 11 official candidates, the five main contenders include three from established political parties:

But in addition, there are two prominent candidates with no established political party behind them, who have developed a one-off campaign entirely for this year’s presidential bid:

Positions in French politics are typically interpreted through the left-right spectrum. Broadly, Fillon and Le Pen have fought for the right-wing vote, and Hamon and Mélenchon the left vote, while Macron is popular with the centre.

Opinion polling tells the story of the race to election day. The following chart shows an aggregation of polling since the beginning of 2017. 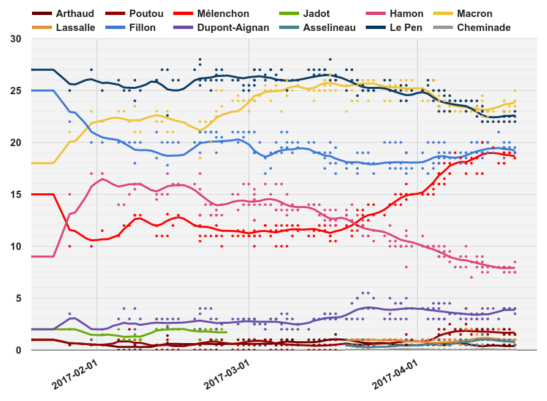 The minor candidates have changed little over the weeks. In February the Green’s candidate Yannick Jadot (green line) strategically withdrew from the race and declared support for Socialist Benoît Hamon after negotiating platform policies with the Socialists.

Strategic withdrawals are a common feature of two-round runoff elections in France, and will play a major role in the subsequent Assemblée elections in June. The Greens and Socialists are also parliamentary parties at the national, regional and local levels, and have plenty of reasons to co-operate.

The purple line represents Nicolas Dupont-Aignan, a right-wing ‘souverainist’ party promoting nationalism and generally opposed to EU membership; his impact has been to keep 3-4% of voters away from Fillon and Le Pen, but these voters will have a further chance to influence the second round of voting.

Marine Le Pen (dark blue line) has led the polling until just the last few weeks, and the certainty that she would be among the final two contestants has dominated strategic choices for other candidates and for voters.

Fillon (blue line) was originally in clear second place, suggesting a re-run of 2002’s all-right second round. But personal scandal and police investigation into mis-use of public salaries to benefit his family have cost him dearly. His party wavered earlier in the year at the prospect of urgently replacing him, but he carries on in a damaged condition.

Macron (yellow line) has been the main beneficiary of Fillon’s troubles, as moderate right-wing voters saw in Macron’s centrist economic policies and personal background a potential president they could live with. Supported by the French centre and those who abandoned Fillon, the Fillon-Macron lines in the chart neatly mirror one another.

The left has also undergone a mirroring of polling lines, with Hamon (mauve line) and Mélenchon (red line) exchanging support twice. But Hamon, the candidate of the current president’s party, ends the race with his support collapsing, and his supporters have recently strategically boosted Mélenchon into serious contention.

The situation is historic in many ways. For the two main parties of French politics to be placed third and fifth is unheard-of. Up to 60% of French voters are backing an alternative political prospect.

Le Pen and Mélenchon are radical alternatives of the right and left, but both have in common opposition to the EU and support for (and perhaps from) Russian president  Vladimir Putin. Either as president would indicate major shifts in economic direction and of France’s place in the EU.

All these forces are boosting Macron. The French centre would reliably win around 6% in past elections. But Macron is much more than the candidate of the centre now; he has become an electoral sponge, absorbing support from frustrated voters across the political spectrum, but also being the secondary ‘safe alternative’ for many who despair of their traditional candidates.

This is a very strong position from which to win a two-round runoff type of election, and Macron is now rightly seen as the election favourite.

Who will ultimately win in the second round entirely depends on who the two final contestants are.

Two-candidate polling sees all her four of her rivals defeating Marine Le Pen in the final round. So while she has been leading the pack throughout the campaign, she appears to be so radical a candidate that she will be unable to win the presidency.

Macron has the opposite profile; in polling he wins all four match-ups against his rivals. All Macron therefore needs to do is place first or second in the first round of voting, and the presidency is his.

The other three candidates, therefore, can only win the presidency if they beat Macron for second place, and then go on to defeat Le Pen.

As Hamon has fallen away, Mélenchon has looked a possibility to surge late in the race to reach second place. This has alarmed many, since Mélenchon shows the lowest polling lead over Le Pen, raising the prospect that this might be the one pathway for Le Pen herself to win. Moreover a final contest between two anti-EU economic radicals would traumatise the political establishment in Europe.

But the latest polls suggest that won’t happen, because in the past week Macron has finally drawn narrowly ahead of Le Pen. At around 24% to Le Pen’s 22%, there is little sign of him falling back to third place. 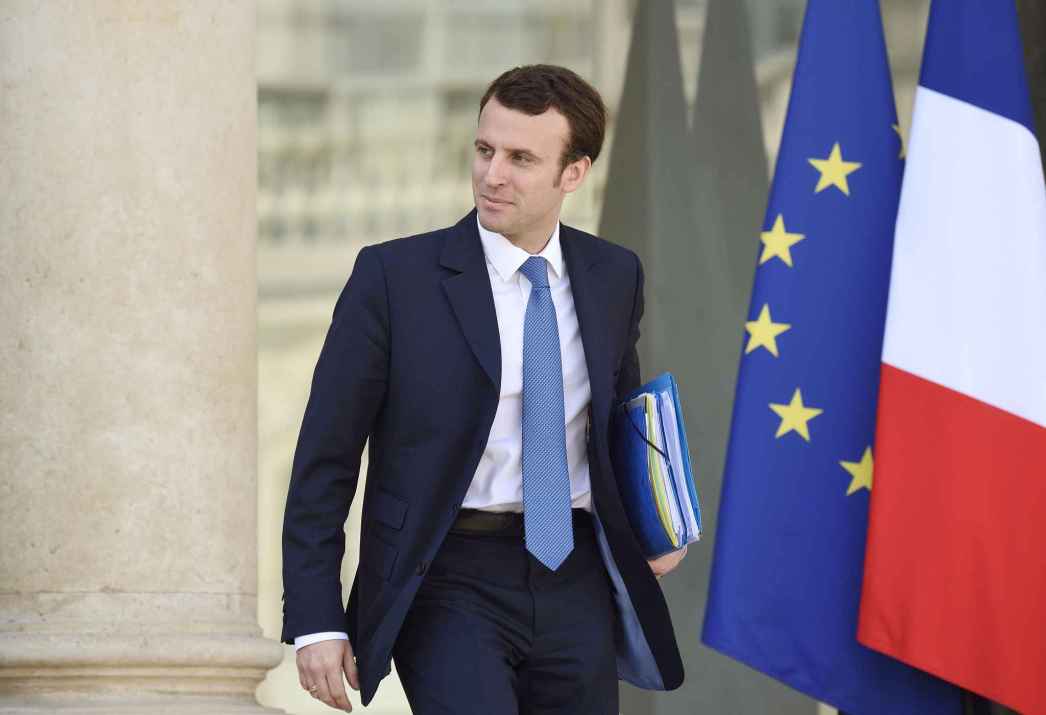 The polling has been consistent, and clear – but polls have been found to be wrong in recent years in other nations.

Voter turnout may also be a factor, although at least this election the French have plenty of choice.

A Macron victory in the presidential election may not be the end of the matter, however. To fully govern France, Macron (or Mélenchon, or Le Pen) will also need to form a government in the Assemblée.

A new president from a self-made outsider campaign would need, within just six weeks, to create a movement capable of contesting 577 local electoral divisions.

After deciding the presidency, there will still be the national parliament to elect to determine France’s government

Political parties across the nation will need to use the runoff voting method to make strategic withdrawals both before and after the first round of parliamentary voting on June 11.

The final political result could be a kalidescope of outcomes, and a very divided Assemblée elected to work with a novice President Macron.

The French voters have much to consider.

The Economist –  The nightmare option; What if the French second round pits Mélenchon against Le Pen? (April 11)

Charles Richardson (Crikey) –  France knows what it wants, but not how to get it (April 20)

This entry was posted on April 21, 2017 by Malcolm Baalman in Executive government formation, France, Two-round runoff.