First German test for the far-right

Elections in Germany during 2017 begin this weekend with the poll for the state assembly of Saarland.

All eyes will be on the performance of the far-right Alternative for Germany party.

Three of the 16 German states (‘lander’ ) and city-states will hold elections between late March and May.

Each of tiny Saarland (on March 26), rural and maritime Schleswig-Holstein (May 7) and economic powerhouse North Rhine-Westphalia (May 14) will elect a single-chamber Landtag.

The Bundestag – the lower house of the national parliament – will then be elected in September.

As with the Dutch elections a few weeks ago, observers are watching anxiously to see whether the right-wing populist Alternative for Germany party (Alternative für Deutschland, or AfD) does well.

German voters fill their state and national assemblies by electoral systems that guarantee political parties a share of seats proportional to their vote share.

Smaller lander, such as that for Saarland, simply fill all the seats through straight proportional allocation to political parties.

The landtage of the larger states, as well as the national Bundestag, are filled through a mixed electoral system, with around half the seats filled in single-member electoral divisions by simple plurality (first-past-the-post) voting, and the remainder then allocated to parties to make the overall result proportional.

German political parties must achieve 5% of the state (or national) vote to be eligible for any seats.

An exception to the 5% rule is made for local political parties based on ethnic identity, but only the South Schleswig Voter Federation party in the state of Schleswig-Holstein now benefits from that exception.

Recent opinion polls in Saarland indicate that the two main German parties – the centre-right Christian Democratic Union (CDU) and the centre-left Social Democratic Party (SPD) will gain slightly on their results from the last state election five years ago.

The radical The Left (De Linke) party will also easily pass the 5% threshold and win seats.

After the 2012 election no party won a majority (as occurs in almost all German elections) and the CDU and SPD chose to govern together in a ‘grand coalition’.

Such coalitions of the two dominant parties are common in Germany, as the main parties are reluctant to form coalitions with ‘extreme’ minor parties.

Of the German minor parties only the centrist Free Democrats (FDP) and the Greens have become tolerable to the majors as governing partners.

The SPD often joins in governments with the Greens at state and national level, and the CDU has traditionally partnered with the Free Democrats.

But in recent years innovations such as CDU-FDP-Greens (known as a ‘Jamaica coalition’ after the combination of party colours – black, yellow and green respectively) and even CDU-Green governments have been tried.

Perhaps the oddest arrangement is in the south-western state of Baden-Württemberg, where a Greens-led government has been in office since 2011. After elections in 2011 the Greens formed a partnership with the SPD, but following the 2016 elections the Greens switched to take the centre-right CDU into their government.

The two main national parties have been active in Germany for a century (with an obvious historical interruption), and the FDP formed following WWII. The Greens party had become well established by the 1990s.

In the past decade German politics has been disrupted by the entry of newer parties.

De Linke formed during the last decade from small left-wing precursors, and has begun winning over 10% in some state votes. But the party has yet to be invited into any governing coalition, being seen as too left-wing by the SPD.

In 2012 a brief flourish of voter support saw the Pirate Party win seats in three states – the same three states that, five years on, are holding elections this northern spring.

The Pirates were not a frivolous party, but rather a serious movement interested in digital technology, personal privacy, copyright laws and related issues. There are also successful Pirate parties in Sweden and Iceland.

Initially founded in 2006 the German Pirates have had just one good year – 2012. Their fortunes collapsed nationally in 2013 amid various scandals and misadventures. They now poll around 1-2%, and are expected to lose their seats in the coming three state elections.

The other, and much more serious, breakaway party is the more recent Alternative for Germany.

AfD was founded in 2013 as a right-of-centre cause highly critical of Germany’s policy response to the fiscal crisis in various Eurozone nations, especially Greece.

Originally a movement of academic policy concerns (allegedly three-quarters of their original party members had doctorates), and largely led by economists, the AfD mutated during 2014 as a sub-faction of more far-right figures took control of the party leadership.

The party remains highly Euro-sceptic in outlook, but is now more concerned with anti-immigration and anti-Islam issues, with a noticeably pro-Russia/Putin touch as well.

At the last national elections in 2013 AfD just missed the 5% cut-off for Bundestag seats, but the party began performing better at state elections from 2014 onward.

Since AfD did not exist in 2012, there is no direct baseline to measure its performance in the coming three state elections.

At the 2013 Bundestag elections the three states with imminent polls were not regions of the party’s best results. In Saarland the AfD scored 5.2% of the vote, in Schleswig-Holstein 4.6% and North-Rhine-Westphalia 3.9%.

The party did best in Saxony (6.8%), Thuringia (6.2%) and Brandenburg (6.0%), but as they did not score 5% nationwide they were not eligible to be allocated Bundestag seats in any state, even those where their vote was above 5%. 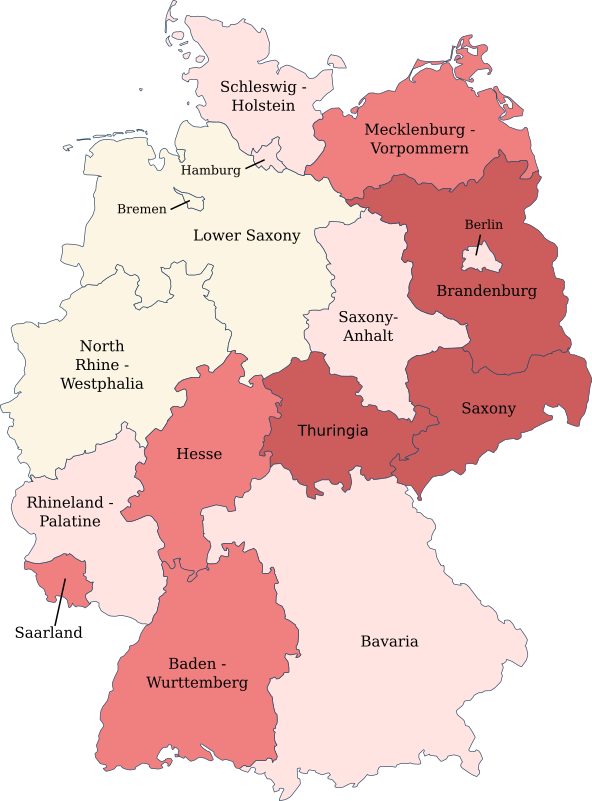 One key political question in the three coming state elections therefore lies in parsing the exact degree of the AfD vote, and its potential national implications.

If the AfD results are up relative to 2013 Bundestag numbers in each state, it will bode well for the party at the national poll in September. They only need a slight lift on the 4.7% nationwide result in 2013 to become eligible to take seats in the national parliament.

This Sunday around half a million voters in Saarland will begin to reveal the trend for the year.

Saarbrücken at night; Saarland is the smallest of the thirteen german states, not counting the three city-states of Berlin, Hamburg and Bremen

Saarland, historically a major source of coal and an industrial centre, played a prominent role in Franco-German territorial disputation in the first half of the 2oth century.

Briefly enjoying a quasi-independent status after WWII, the territory was administered by France from 1945 to 1956. Saarland sent a separate delegation to the 1952 Olympic Games. The region rejoined Germany after a referendum.

But not only is the established Free Democrat party still polling well below 5%, but the Greens have also slipped into the relegation zone, polling 4%-5% since the new year.

The Pirates, polling 1%, look certain to win no Saarland seats.

AfD on the other hand looks very likely to win seats, polling between 6% and 10% of the vote – noticeably up on the 5.2% 2013 Bundestag figure in the state.

If the next Saarland Landtag has only four parties – the two main parties, and the untouchables De Link and AfD, then a repeat of the current grand coalition government seems a foregone conclusion.

The sparsely efficient assembly chamber of the Landtag of Saarland

The Dutch election earlier this month saw the far-right anti-immigrant Freedom Party perform less well then first expected, but still draw a healthy 13% of the vote.

The European-style party-proportional electoral system does not assist politically extreme parties with minor levels of voter support to enter into executive government.

But it does force major parties to put aside differences and form alliances to block that outcome.

Election results: there is no obvious English-language source for this Sunday’s Saarland Landtag election results, but given the poll’s unusual relevance the BBC will most likely cover the event. The Wikipedia page for this election also indicates it will publish results.

One comment on “First German test for the far-right”