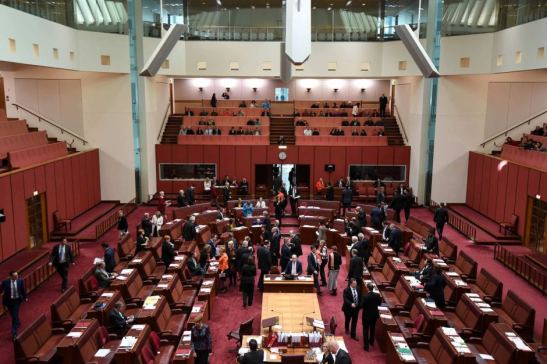 Lenore Taylor reports in the Guardian today that Parliament will soon consider legislation to change the ballot paper design and voting rules by which Australian senators are elected. Philip Coorey in the Financial Review reported similar indications last week.

Since 1949 is has been compulsory for voters to number every candidate in their state or territory in one continuous ranking on their ballot papers, or lose their vote.

But since 1984 voters have been offered an alternative that transfers the details of their vote into the control of political parties.

Both rules look set to be repealed in the next few months.

The elimination of the compulsory preferencing rule will allow many more voters to make their own selection and ranking of individual candidates, without needing to manufacture dozens of false rankings to complete the ballot paper or risk their vote being annulled.

The other change, repealing the party-controlled ‘ticket voting’ option, will eliminate the mechanism which has allowed multiple micro-parties with diverse political goals to gather their voters into one pool, boosting the chances of one largely random member of their group being chosen as a senator. The approach has ballooned in the past two elections and in 2013 determined a seat winner in at least three states.

The change to the ticket rule may also see some reduction in the reliable vote totals and preference flows of the major parties, as more voters shift to using the easier version of the candidate-based ballot.

Voters will still be offered a simplified version of the party option, but party-controlled preference flows to other parties will no longer occur.

There are reports that both voting options may still come with a rule that voters must choose a minimum of 6 candidates or 6 parties, but the order of each will be entirely for the voters to choose.

Depending on parliamentary debate, the minimum-preferencing rule may be watered down further to no more than an encouragement to voters to use a minimum number of preferences, with no penalty if they do not. This has been the practice in ACT elections since 1995.

The introduction of the new rules, and their mismatch with other state and territory voting rules, may also cause problems at least for the first election using the new rules. The legislation may include ‘savings provisions’ to prevent voters losing their votes.

The electoral commission is thought to be anxious about the time it will need to implement any new system, and to organise voter education campaigns, in advance of this year’s election.

In 2014 a parliamentary inquiry into the impact of the rules on the last election resulted in unanimous recommendations for the reforms.

The media reports in the past week indicate that the Coalition government will introduce the legislative amendments, and has already secured the support of the Greens and prominent independent Nick Xenophon.

The reported supporters of the legislation make up a majority in Parliament, but they may still disagree on the details of the changes. Variations relating to the length and strength of the minimum preferencing rule appears to be the only change being discussed in Parliament.

The Greens have specified that they see the minimum preferencing rule for the ‘party’ ballot option, and the rejection of seperate proposals to make it harder for new and small political parties to register, as elements of any agreement.

Seven other independent and micro-party senators have declared their opposition to the reforms. Four of these senators were elected as a result of the ‘pooling’ technique using the ticket voting rule.

The Labor party – whose committee members joined in the unanimous inquiry recommendation in 2014 – is split on the issue. At least some of its senators, who like the micro-party senators owe the reliability of their own re-election to party control of voter preferencing, are actively opposing the change.

The ABC’s Antony Green posted a detailed analysis of the issue on February 3 and again today.

Update 12 February: Dr Kevin Bonham in Tasmania has also published a lengthy post on the matter; also be sure to read on to Dr Michael Maley’s comments at the end of the post.