Australia has gone to a national election, and the result is a Parliament virtually identical to the outgoing one. The incumbent Liberal-National government will continue in office.

And key political issues – such as climate-change policy – look set to remain deeply divisive, and unresolved.

Official statistics – with the votes of around 75% of registered voters tallied so far – portray the Liberal-National government holding on to a 1-seat majority in the House of Representatives, with 76 of the 151 seats.

Leaving aside events late in the last term of parliament – a defection and a lost by-election – this is more or less the same position the Government held in the outgoing 150-seat House. 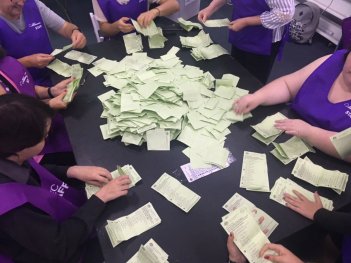 Vote counting is still underway, and very close contests may take around two weeks to finalise.

Results are not final. Australia has very high election turnouts, and the final total of votes tallied should reach around 90% of registered voters.

Around half a dozen seats remain too close to call yet in the key government/opposition contests, according to the Electoral Commission and leading election commentators.

The Government may move up to as many as 78 seats – a safer but still narrow majority – or it may fall back to perhaps 75 seats.

In any case, the Liberal-Nationals will form a government, with Labor being clearly at least half a dozen seats behind them.

The seat of high-profile independent Kerryn Phelps is nominally being listed as a narrow government win, but tallying is incomplete and she may still be re-elected.

The two major parties appear to have exchanged wins and losses in different parts of the country, with around 5 seats moving in each direction between them.

The Liberal-National Coalition and its supporters are delighted overnight, and the Labor party devastated.

Polls had anticipated that the aggregate Labor support in the country would rise from 49.7% at the last election to around 51.5%. In fact the Labor vote share appears to have slipped backward slightly to around 49.1%. The stable picture presented by polling industry has been significantly awry across the board, and the polling industry has some serious self-analysis ahead of it.

What were Australians really thinking?

In fact the underlying picture, looking at actual public first preference votes, is not particularly favourable to either the government or the opposition.

Australians still seem to be searching for alternatives. The total vote share of both major parties has slipped slightly, with the Coalition falling from about 42% to around 41.3%. Labor has also eased backwards, from 34.8% to around 34.0%.

While these slippages are small, they confirm the 2019 election as the lowest ever total House of Representatives vote share for the two leading parties.

Around 25% of Australians gave their first preference vote for some alternative to the two parties which have governed Australia for over a century.

The aggregate of left-wing or progressive minor parties is up slightly from 11.1% to 11.4%. Almost all of that is votes for the Greens, although some slight fragmentation has occurred, with small numbers of votes shifting to micro-parties such as the Animal Justice party.

Micro-parties of the Christianist right have had a poor election, slipping from around 2% to around 1% of the vote.

Parties of what might loosely be termed the ‘populist right’ – although that description is imperfectly reflective of the views of voters in this mixed group – have done better, rising from around 2.5% to around 4.5%. These voters generally preference to Coalition candidates 60/40 over Labor candidates.

Independents have also improved their support, up in aggregate vote from 2.8% to 3.5% nationally. But independent voter support is very geographically localised, and independent candidates have won election in five electoral divisions – possibly one more – and been competitive in several others.

The other remaining change is that mining magnate Clive Palmer’s novel ‘United Australia’ party won 3.5% of the vote nationally. However most of this voter support was in relatively safe seats, and preferences from voters supporting UAP candidates do not appear to be determinative of any single close contest between Coalition and opposition candidates.

Palmer himself had attempted to be elected as a Senator for Queensland, but won just 3% of the vote in that state.

In overall Senate results, it appears that every jurisdiction will split evenly between conservative and progressive (broadly defined) elected senators (3-3 in each state, 1-1 in each territory). Independent Jacqui Lambie may well take one of the ‘right’ conservative seats in Tasmania, and One Nation candidate Malcolm Roberts will almost certainly take one of the ‘right’ seats in Queensland.

In other states Senate results should be 3 Coalition, 2 Labor, 1 Green. Other candidates with strong profiles, such as Centre Alliance former senator Skye Kakoschke-Moore in South Australia and Rod Bower in New South Wales, have polled well below expectations and will not win a place.

The Greens appear to have had a good result, holding on to one Senate seat in each of the six states, to join three more incumbent Senators not facing election this year.

The post-election politics will see various explanations emerge. Campaign tactics – including hype about preference details – will be much discussed. Criticisms of Palmer’s alleged $80 million advertising spend will drive calls to reform the election finance laws.

Analysis of Labor’s approach of proposing reforms to tax loopholes on a number of fronts will feed into discussions about whether future oppositions will take courageous policies to future elections.

But one problem will remain unchanged – the tortured efforts of the Coalition to find a popular policy on climate change.

Winning two seats in Queensland will convince some that a pro-mining, limited-climate-action policy has been endorsed by the electorate. But losing significant voter support in safe Liberal city seats will suggest the opposite. The Coalition will continue to be divided, and public controversy over climate impacts, mining, energy and related issues will continue.

The coming Parliament, like the last one, will be tense. Unless the government gets to at least 77 seats in the House, and after sacrificing one to hold the Speakership, support on the floor of the chamber will remain potentially hostage to expulsions from Parliament (several occurred during the last Parliament), defections, or by-election loses.

This entry was posted on May 19, 2019 by Malcolm Baalman in Australia, Australian House of Representatives, Australian Senate, Current issues, Election results, Uncategorized.