Australians have been watching developments last week regarding ranked choice voting* (RCV) in the state of Maine – and potentially elsewhere in the US – with great interest, because Australia has been using this mode of voting for over a century.

After initial trials in the states of Tasmania and Queensland in the 1890s, a proposal to adopt preferential voting for national elections was narrowly rejected by the new Australian federal Parliament in 1902, and again in 1906.

But the idea certainly did not go away (it had many proponents), and by the time of the First World War state legislatures had adopted the system in state elections in Victoria and Western Australia. The national Commonwealth Liberal Party, then in opposition, supported it in 1914.

The Australian Parliament abruptly turned again to consider preferential voting in 1918. The incumbent Nationalist Party government was facing the crumbling of its support in rural areas with the emergence of the Country Party, leading to splitting of the conservative vote.

One by-election (special election) during that year for a federal electorate in the state of Victoria – where preferential voting was already familiar – saw the Country Party only refrain from nominating a candidate against the Nationalists in return for a commitment that the government would introduce preferential voting for all elections to the national Parliament.

Before this commitment could even be acted upon, another by-election in Western Australia saw a government seat actually lost to the Labor Party after the conservative vote was split between three candidates.

When in late 1918 yet another by-election in Victoria was required the government, reacting rapidly, added an urgent amendment into a Bill being considered to enact a comprehensive new national Electoral Act.

The upshot was that from December 1918 – the by-election in the Victorian division of Corangamite – all Australian national elections have used preferential voting.

As a result, virtually no living Australian has ever voted in an Australian election that did not involve preferential (ie: ranked choice) voting.

In discussing elections Australians talk of who will win the ‘first preferences’, how voters intend to order their preferences, and the ‘flow’ of preferences during the count. Parties sometimes engage in ‘preference deals’, which are simply agreements to urge their respective voters to cross-support their candidates. 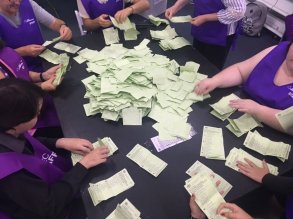 Counting of House of Representative ballots in a recent Australian election

Australian elections are significantly simpler affairs than US ones, because state and federal elections are separated in time, and only involve at most elections for two offices (members of the two chambers of the federal or state parliaments), whereas US elections see multiple offices voted for on the same large, machine-scrutinised ballot sheets. The smaller, single-use Australian ballots are therefore much easier to handle and count.

Another relevant point is that there was never any suggestion in the 1890s, nor after the Australian Constitution was adopted, that preferential voting was in any way contrary to constitutional principles, or beyond the authority of Australian parliaments to include in electoral laws. Australia’s ‘founding fathers’ had already openly debated whether to adopt preferential voting by state or federal laws.

Australians have worked on the details of preferential voting systems over the century in a number of ways.

The split between using preferencing in single-member electoral divisions and using it in multi-member divisions – the single transferable vote (STV) system – was present from the beginning. In fact the first usage – in Tasmania in 1896 – was a partial STV multi-member approach in Tasmania’s two urban areas.

Australia went on to be a pioneer of STV, which was also later adopted in Ireland (now being retained in both the Northern Ireland and Republic of Ireland communities) as well as some western provinces of Canada for a few decades. 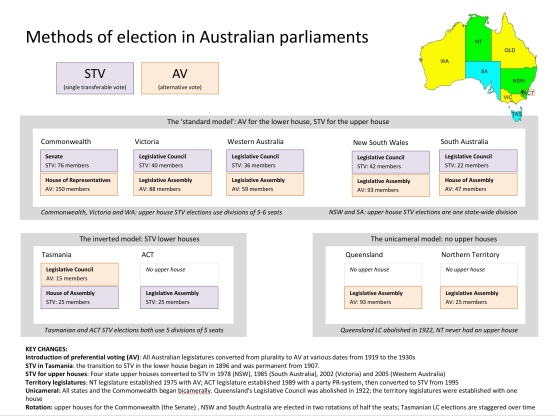 Australian preferential voting also made another change, in the adoption of compulsory preferencing, which requires a voter to number every candidate in order for their ballot to be valid. This idea, adopted in 1924, is more controversial, as it is a form of restraint on choice (or rather, a demand that voters express choices which they do not in fact hold).

Technical commentators often express a fear that without compulsory preferencing, elections might regress back into plurality contests. Certainly in modern times major parties have on occasions encouraged voters to ‘just vote 1’ at some elections, which it suited their tactical advantage to send that message.

But even in the voluntary-preferencing state elections in Queensland and New South Wales (although Queensland has recently been converted back to compulsory preferencing), the evidence is that most voters still preference several candidates.

In Australia’s STV-system elections for the national Senate, other state upper houses and the lower houses in Tasmania and the ACT, preferencing requirements have provided for various contrivances on ballot papers to allow votes to be cast for parties rather than individual candidates. They are generally becoming flexible again in recent years, with ballot instructions such as “number at least 5 candidates” being applied as validity rules, or even as mere guidelines to voters.

In the current debate in the United States the option of compulsory preferencing is entirely absent. The notion is somewhat contrary to US cultural norms of free individual agency, and quite possibly unconstitutional for related reasons.

Overall, Australian history offers electoral reformers and designers in the United States (and elsewhere) many lessons in the use of ranked choice voting.

It certainly appears that ranked choice voting as an idea is spreading rapidly in the United States as its people struggle to deal with their hyper-partisan – and in many ways problematic – democracy.

(* ‘ranked choice’ voting is a relatively recent term adopted in the US for the method of voter-ordered vote transfers, known in Australia as preferential voting. It is also termed instant runoff voting in the US and Canada and the alternative vote in the UK. The approach can be used in single-member elections or in multi-member elections, the latter being the voting system known worldwide as the single transferable vote (STV) electoral system.)

This entry was posted on November 21, 2018 by Malcolm Baalman in Australia, Current issues, Preferential voting, United States, US states.