Predictions of a major ‘wave’ against Republican party incumbents in the coming US midterm elections have gained ground at the final special election to be held before the general election on November 6.

Republican candidate Troy Balderson appears to have very narrowly fought off Democratic candidate Danny O’Connor in a contest for the vacant seat for the 12thHouse of Representatives district of Ohio. 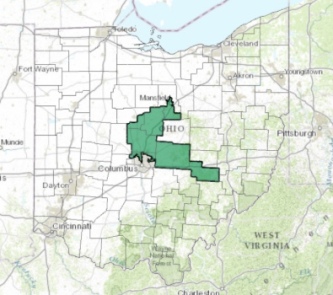 The 12th House of Representatives district of Ohio; strangely shaped due to gerrymandering (image: Wikipedia)

The election-night counted result is so close – 1,754 votes, under a 1% margin – that there remains speculation that around 3,400 uncounted provisional ballots and up to 5,000 unaccounted-for postal ballots could alter the outcome. That prospect has a pretty low probability.

Separately, some voices are using the presence of a third candidate from the Green party, who won around 900 votes, to call for the introduction of ranked choice (aka preferential) voting. Preferences from ballots cast for the Green candidate obviously would not be enough to change the outcome on the pre-provisional vote tally as it currently stands, but the close result is still stirring debate about voting system reform.

The larger issue is what this result portends for November. This was a very safe Republican party seat, won easily at the past several general elections by retired Republican Pat Tiberi. The Democratic party has no business being anywhere this close to winning.

All major US election forecasters are predicting some form of ‘blue wave’, although the scale and uniformity of it are in debate and margins for error in estimates remain high. But the general trend as the weeks of the election primary season go by is slowly and steadily more towards favouring the Democratic party.

It is important to note that two issues are at work here – whether there is any underlying swing of votes from Republican to Democratic, and what rate of turnout each party’s supporters will manifest.

Turnout in US elections is at its best (still a fairly modest mid-60%s) in the four-yearly general elections where the presidency is also contested – 2012, 2016, and 2020. 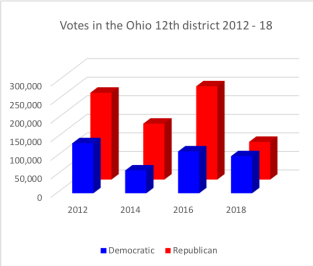 This week’s special election (marked ‘2018’) saw lower than standard voter turnouts, but the relative difference between parties was striking

With the House seats being re-contested every two years, turnout is sharply lower in mid-term elections – 2014 and 2018. In 2014 the lowest-ever turnout result of the 20th century full-franchise era – just 34% of registered voters – was recorded.

Turnout is typically even lower at special elections to fill vacant seats, as happened this week.

What Tuesday’s result confirms is that the turnout trend – and/or possibly actual swinging support as well – in special elections this cycle is massively favouring Democratic candidates, even in safe Republican-held districts.

Even assuming no voters have changed their support, barely 40% of those who voted Republican just 21 months ago turnout out to support this week’s new Republican candidate. But around 90% of the number who voted Democratic in 2016 turned out this week.

The Republicans have come within a whisker of losing this seat, but they should be on much safer ground to retain it when turnouts recover at the general election in November.

The uncertainty is fraying the nerves of Republican strategists in the US. There are innumerable signs suggesting a strong general Democratic turnout in November, and very few signs hinting at a vigorous Republican turnout.

Republican state legislators have shamelessly sandbagged their control of the House majority with a major and organized effort of district boundary gerrymandering earlier in the decade. Analysts estimate that nationwide the Democrats might need to beat the Republican vote total by at least 6% to win the same number of House seats.

But there are growing signs that the sandbags may turn out to be sandcastles, if the Democratic advantage in turnout remains this strong.

This entry was posted on August 9, 2018 by Malcolm Baalman in Current issues, Gerrymandering, Plurality (first past the post), United States, US House of Representatives.