Gun reform cause: partisanship imposed by broken US voting system

The astonishing campaign by US school students to change gun safety law leads directly to calls for current legislators to respond, or be voted out of office.

But one key element of the student’s calls – that the issue remain apart from partisanship – is almost impossible under the current US voting system.

The political energy seen since 17 students and teachers were slain in Marjory Stoneman Douglas High School in Parkland, Florida on February 14 has been historic.

Many Americans have toiled away on the gun safety cause for years. But in just six dramatic weeks the cause has attracted millions of new adherents. Campaigners old and new are scrambling to coordinate and organise – and even to meet each other.

A younger generation, entirely at ease with online communications and connectivity, have changed the political landscape.

Many of the campaign’s leaders cannot yet even vote, but are suddenly having a political impact which established campaigners have strived for in vain for years.

Almost every voice is calling for millions of young people to get registered and to vote, as well as for older Americans to support them.

Parkland student leader David Hogg, articulating the sharp political edge of the campaign’s demands, repeatedly expresses his hope that political reform will not be about “Democrats vs Republicans”. He insists the campaign is about a law reform issue, and calls for the cause to embrace both wings of the US partisan divide, as well as independents.

But there is a massive technical problem. The US electoral system, based entirely on electing people to Congress (and the state legislatures) by plurality voting in single-member districts, fundamentally locks both the candidates and the voters into an irredeemably partisan model.

Until a few decades ago, the relatively weak partisan culture in the US placed more emphasis on the individual issue positions of elected legislators than was the case in most other democracies.

But that has changed. All the processes of the primary pre-selection of candidates, the biennial elections and the day-to-day conduct in US legislatures have become strikingly hyper-partisan, with a seriously depleted space for any common ground on issues.

Come November’s elections, every Democratic and Republican candidate will need to have a position on gun safety law reform. The campaign of the past few weeks has made that certain.

No-one doubts that most Democratic candidates will support reform, but they will do so to varying degrees, with differences of detail.

Most Republicans – although not all – would traditionally be resistant to reform, and be likely to take up strident positions.

The donor and campaign-support influence of the National Rifle Association, heavily pro-Republican, has been a large part of the gun safety debate in recent years, and recent weeks. Nonetheless, the current campaign may force many Republican candidates to shift their stances. 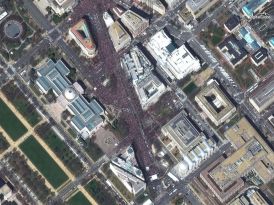 Yet try as the campaign might, the debate is almost inevitably going to become partisan, with support for reform essentially meaning supporting Democratic candidates over Republican ones.

For many Americans who hold an existing preference between the political parties, basing a vote on the gun safety issue may need to mean distorting their basic partisan preference.

Voters who normally prefer Democrats but are motivated by resistance to gun safety reform may actually be forced to consider voting for a Republican alternative.

Likewise, those who want reform but feel that Republican control of legislatures is important to them for other reasons could be forced to abandon the gun safety cause in order to keep voting Republican.

And where Democratic candidates are not strong enough on gun reform – or conversely, Republican candidates take a moderate – many voters on both sides may find they have no-where t0 turn for satisfactory representatives.

The battle will initially be fought out in the party primary season, at which each party’s single candidates for November will be selected. These state-based processes began just a few weeks ago and run until September.

In theory this could provide a chance for partisan supporters of both the major parties to make gun safety an issue in the primary elections.

But this still doesn’t work effectively as political representation for all. The more polarised the issues (and the candidates) become, the starker the forced voter choices will be in November.

The immediate practical result is that the gun law legislative reform cause is only likely to advance if there is a sizeable Democratic victory in the mid-term elections for Congress and the state legislatures, taking place just over 200 days away on 6 November.

It doesn’t need to be this way; there are simple and tested alternative ways of electing legislators that can accomodate different policy positions within each party, all the way through to the final elections in November.

If the November elections saw multi-member district races, Democrats and Republicans of all positions, as well as independent candidates, could campaign for voter support on their various policies, through both the primaries and the final election.

If a large district was going to elect 3, 4 or 5 members (or better still, even more places), Democratic voters could choose to back a pro-gun safety reform candidate. If others are uneasy about gun reform but still want to support the Democratic party, there is likely to be an alternative candidate available to suit them also.

Likewise, Republican voters seeking action on gun safety can back a pro-reform Republican candidate, but have the back-up to another Republican as well, if that is what they decide is important.

The mechanism for making this happen is ranked choice voting, or preferential voting. It works as just described when used in multi-member districts – although not in single-member districts.

Maine voters last year approved the use of single-member district preferential voting, which is a small step in the right direction; their legislature has tried to thwart even this reform.

Multi-member ranked choice voting has been used in some elections in Australia and also in Ireland for around a century, although in the Australian case such voting is embedded in a political culture featuring very strong party discipline on policy positions.

Applying such a voting system to the US electoral culture, with its potential for less strict party discipline, could result in new legislatures capable of representing the true positions of the electorate on issues such as gun safety, whilst still maintaining an overall partisan outcome that is representative of the nation (indeed, it would be much more so than the current system).

A variety of political movements, including the national FairVote organisation and many state-based campaigns, have been seeking this electoral reform for years. Congressman Don Beyer has a bill before Congress to bring in precisely this way of voting.

Multi-member, ranked choice voting would need to be introduced for every state simultaneously in order to to work without distortion.

National legislation would be needed, because the US states must for the moment comply with a 1967 national law requiring the single-member-district system.

In any case, introducing the freer way of voting in some states but not others would create a small number of strongly partisan states with a distorted degree of influence on the election. To work fairly it has to be a system applied uniformly across the nation.

It hardly seem realistic that the US Congress could legislate for multi-member ranked choice voting in time for November’s elections. Elected Republican legislators, and indeed most Democrats, have traditionally shown little interest in such reforms. President Donald Trump would also need to agree to sign the legislation.

Given his unpredictability, President Trump might even embrace such a reform, perhaps to show that he was working on his claim to be ‘draining the swamp’ of Congress.

It’s probably too late to change the voting system now, so the fate of the gun safety reform movement is most likely doomed to end up in a partisan situation – the opposite of what David Hogg hopes for.

But as the gun safety issue plays out observers in both parties, as well as the nation’s independent voters, will this year clearly witness how America’s out-of-date electoral system is incapable of handling the electorate’s response to a single major cross-partisan issue such as gun safety.