Last weekend’s elections in Colombia have produced complex parliamentary chambers where even the largest two parties could not combine to reach a majority of seats.

Right through the 20th century the country had a simple party milieu, consisting of a Conservative party and a Liberal Party.

But since 2002 the nation has also seen a series of new parties formed to support former independent president (now Senator) Álvaro Uribe, who broke through the two-party duopoly to hold the presidency from 2002 to 2010. At one point Uribe enjoyed 70% approval ratings.

Uribe has taken the unusual post-presidential path of remaining active in his nation’s parliamentary politics.

Uribe’s support base has since split and evolved into three different ‘Uribista’ parties: the Social Party of National Unity (or ‘Party of the U’), the Radical Change party and the Democratic Centre party. Uribe himself now leads the latter of these three.

Almost all the main Colombian parties are nominally somewhere on the political right, with differing economic and social policies. The Liberal Party presents itself as a centrist social liberal party. 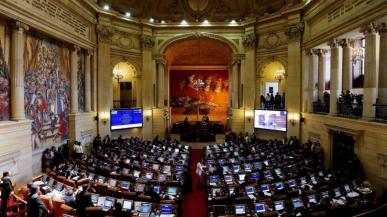 Forming a majority out of combinations of six significant political parties will prove challenging, with different numbers on the Congreso’s two chambers (image: EPA – vocfm.co.za)

Overall, the three fractured Uribista parties have 49 of the 102 seats in the Senate and 87 seats (just over a majority) in the Cámara.

The nation has only recently reached a peace settlement with the former insurgent FARC Guerilla force, which was in open rebellion against the governoemtefor over 50 years. Under the settlement, five additional seats in each of the Cámara and the Senate will be allocated to FARC representatives.

Colombia will also elect its next President on 27 May, under a unique constitutional design in which presidential elections follow shortly after parliamentary elections.

There is a wide field of presidential candidates, and some of the leading contenders have formed their own campaigns distinct from the existing parliamentary parties. Uribe’s Democratic Centre party and the Liberal party are nominating a presidential candidate in their own names; the other main parties have joined in various coalitions to promote candidates.

The three Urbanista parties are each backing different presidential candidates.

Uribe’s Democratic Centre party is in a presidential-ticket alliance with the Conservative party, and is broadly sceptical of the current restoration of legitimacy to the FARC.

The electoral system and recent election results have given Colombia an unusually complex situation in which partisan influence is divided differently between the presidency and the two chambers of the national Congreso. The political situation seems certain to remain highly divided.

This entry was posted on March 15, 2018 by Malcolm Baalman in Colombia, Uncategorized.