Nepal to resume parliamentary democracy after 20 years of strife

After two decades of national turmoil, Nepal is on the verge of restoring government by parliamentary democracy.

The Himalayan nation’s new parliament will be elected over two election days. Elections in some regional mountain districts were held on November 26, and the remainder will take place next week, on December 7.

The new parliament will be only Nepal’s 4th elected assembly. Parliamentary elections in the former monarchical state only commenced in 1991, but the parliaments elected in  1991, 1994 and 1999 were all dissolved early amid political troubles.

The new Nepali parliament will sit in the Pratinidhi Sabha building in Kathmandu (image: Krish Dulal)

Since 2002 Nepal has seen a series of non-parliamentary governments, and also witnessed the collapse of the monarchy itself.

The new 2015 constitution, which took over a decade to wrangle into existence, sees the nation transformed into a parliamentary republic and a federation, with a national government and seven regional state governments.

The national government will be formed in the House of Representatives ((प्रतिनिधि सभा)), which will have 275 seats.

110 of the House of Representatives MPs will be appointed by party list seat allocation, in proportion to each political party’s national vote share.

Separate local elections will be held to elect another 165 local MPs in single-member districts by the plurality (first-past-the-post) system.

To be eligible for any of the 110 national list seats, parties must win at least one local division seat and also secure at least 3% of the nationwide vote.

The Maoists have therefore abandoned their present strategic alliance with the more centrist Nepali Congress party, under which the two were leading the interim national government.

Under the alliance the UML will nominate candidates in 81 of the 165 local seats, the Maoists in 77, and in 7 local contests the alliance will be put forward a candidate from a minor allied party.

The candidate-sharing agreement will play to each party’s regional strengths, and maximize their collective vote.

The results of local elections earlier in the year revealed that working together, the Communists groups are well-placed to secure a majority in the coming national parliament.

Some analysis see international influence at work, with China regarded as seeing its interests in Nepal better advanced through the Communist parties, and India closer to the Nepali Congress party.

Apart from the main contest between the Communist group and the Nepali Congress party, many voters in lowland Eastern Terai areas also favour a third cluster of ethnic ‘Madhes’ parties, which have sought greater cultural and political autonomy throughout the constitutional reform process of the past decade. 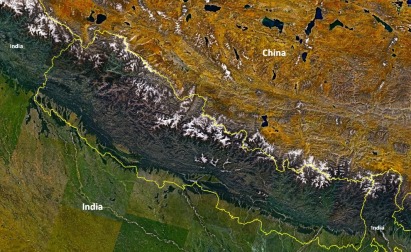 Much of Nepal is mountainous; the population is higher in the lowland areas and in the capital Kathmandu, in the centre of the nation (image: NASA-Landsat)

Madhes representatives were opposed to elements of the constitutional settlement, and may prove difficult governing partners if they should attain a balance of power between the Communist and Congress blocs.

Voting for 37 of the 165 local electoral division contests, as well as the separate nationwide party vote, took place in regional mountain areas on November 26.

Voting in the districts with the remaining 128 electoral divisions is to take place on December 7.

No results from the first regional voting have yet been announced.

New Left in Nepal — on legislative elections in Nepal (The Hindu, 9 October)

This entry was posted on November 28, 2017 by Malcolm Baalman in Electoral reform attempts, Nepal, Plurality (first past the post), Seat allocation PR elections.