The Legislative Assembly of Queensland has been dissolved for an early election – possibly the last time a state premier can casually choose an election date in Australia.

Once the coming November 25 state election is completed, all six of the Australian states and two major territories will have fixed four-year terms for their parliaments, with election schedules now embedded in the state and territory constitutions.

New South Wales was the first state to adopt fixed-term elections, from 1991. The other states and territories have all followed suit, with Queensland the last to change its state constitution only last year.

There remain various emergency provisions to hold early elections in cases of the collapse of confidence in a government or blocked budgets. But premiers and chief ministers will no longer be able to seek an partisan advantage from choosing the time of elections.

By contrast, the Australian national Parliament does not have fixed term election cycles. The House of Representatives can be dissolved whenever the Prime Minister advises the Governor-General to do so, with a maximum House term of three years.

The national Senate changes half its members on 1 July every third year, but Senate elections are conventionally called to be held on the same date as House elections.

In special circumstances involving blocked legislation, the Prime Minister can dissolve both national parliamentary houses – as happened in 2016.

Queensland is the only Australian state to have a unicameral parliament, after the state abolished its Legislative Council in the 1920s.

The Queensland state Legislative Assembly is now expanding from 89 to 93 members, resulting in a major review of electoral division boundaries in the past year.

The chamber of the Legislative Assembly of Queensland

The members of the Legislative Assembly are elected in single-member electoral divisions by preferential voting (the ‘Alternative Vote’).

But perhaps the most significant recent Queensland electoral system change was the late-night, unannounced legislation in 2016 to require all voters to mark preferences on their ballots for all of the candidates in their electoral division.

In the coming election, ballots which fail to rank all of the local candidates will be invalidated, disenfranchising all such voters.

The Australian ‘compulsory preferencing‘ approach was adopted in the 1920s shortly after the nation adopted preferential voting.

But the approach now applies only in national elections and in elections in the states of Victoria, South Australia, Western Australia.

In recent decades New South Wales, Queensland and the Northern Territory shifted to ‘optional preferencing‘, in which ballots are not invalidated if voters only rank some of the available candidates.

The STV electoral systems in Tasmania and the Australian Capital Territory, and the STV voting systems for the national Senate and most of the state Legislative Councils, also use optional preferencing. 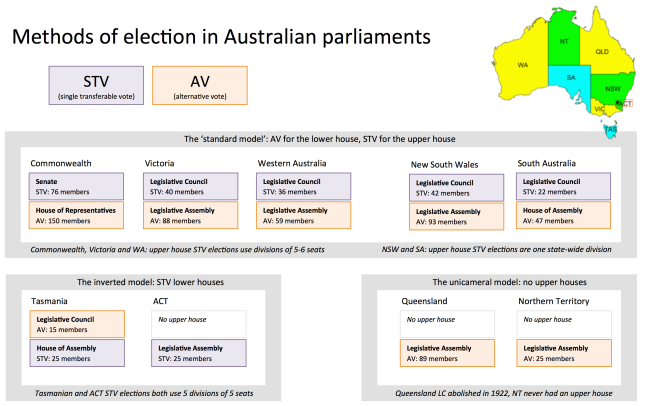 While collecting such voter preference information is useful in determining the most favoured candidate to represent each district, many such ‘forced’ preferences are just voters filling in rankings for candidates about which they have no information or opinion, merely to complete the ballot paper validly.

Optional preferencing runs the theoretical risk of collapsing back into a simple plurality vote, yielding the same results as first-past-the-post voting.

But in the Australian context – where voters are very familiar with the power of preferential voting – a large majority of voters in the optional voting electoral systems still fill out multiple preferences.

Preferencing rule changes in Australian electoral laws over the decades have generally been taken by the partisan majority in sitting legislatures to obtain short-term political advantage.

When it passed the compulsory preferencing change last year, Queensland’s governing Labor Party hoped to round up the support of the significant number of voters supporting the Greens party.

But Labor’s partisan tactics last year have backfired, as they underestimated the rise of the more conservative One Nation party in the past year.

The political situation in Queensland going into the election is volatile. The centre-left Labor Party and the conservative Liberal-National Party (LNP) are close in the polls, with Labor leading narrowly.

The One Nation party is polling at around 13%, most likely taking more votes from the conservatives than from Labor. But in earlier polls One Nation was running at over 20% support. The 2nd and further ballot preferences of their voters are not easily predictable.

The Greens are running at around 8%, but are unlikely to win any seats. The preferences of their voters should flow strongly to Labor candidates in each electoral division.

Labor also has the advantage that the popularity of the Premier, Annastacia Palaszczuk, is strong, while the leader of the LNP, Tim Nicholls – who was Treasurer in the controversial former LNP government – is travelling much less well.

Nonetheless, One Nation is expected to win a number of seats in the divisions where their vote is strongest, possibly giving them the balance of power on the floor of the next Legislative Assembly.

Update: Tasmania’s leading psephologist Kevin Bonham advises that Tasmania has not actually constitutionalised four-year fixed terms, but have merely been following a very consistent practice of four-year election timing (with elections in around March, the next one due in 2018) for a few decades now.

This entry was posted on October 30, 2017 by Malcolm Baalman in Preferential voting, Queensland.