Argentinians to elect half their parliament

Argentinians are voting on Sunday in an unusual two-cycle system to elect their national legislature.

The system involves half of the seats in each of the the Cámara de Diputados (Chamber of Deputies) and the Senado (Senate) being elected in each two-year electoral cycle. The elected members then serve four-year terms.

Essentially, half the houses are elected every two years. The Senate elections involve half the provinces choosing all their Senators each cycle.

But the Cámera is elected differently, with each province electing about half its seats each two-year cycle. This weekend 127 of the 257 Cámara seats are up for election, while 130 seats belong to the other cycle.

Such phased electoral systems are seen in the United States and Australian Senates, but its use for the Cámara is unique among world lower houses.

Argentinas executive government is not, however, formed in the house, but is vested in the directly elected President.

The electoral system is basically one of closed list party proportional representation.

There is a low nominal threshold of 3% of the vote for political parties to win seats, but that does not reflect the political reality.

Many of the Argentinian provinces have relatively small population shares, but are allocated a minimum of 5 Cámara seats. Across the two-phase electoral cycle, this means that several small-population provinces are allocated either 2 or 3 seats at each election. With so few seats on offer, often parties with large voter shares can win seats.

Camera seats up for election this cycle, by province

Minor parties can do better in the four medium-sized provinces and in the largest two jurisdictions, Buenos Aires province (35 seats to be filled at this election) and Buenos Aires city (13 seats).

And a few of the more regional provinces have strong local parties which secure seats over the national major coalitions.

But overall the system essentially distorts results in favour of the largest coalitions.

Nonetheless, the party system in Argentina is fragmented enough that no coalition now seems close to controlling a majority of the Camera alone.

The major political groups in Argentina are the centre-left (Front for Victory, or FpV) which is associated with the two Kirchner presidents over the past 15 years, and the broad-spectrum Cambiemos (Let’s Change) movement, which supported the current president Mauricio Marci into office in 2015.

A total of 12 significant parties had 2 or more seats in the divided outgoing Camera, together with a small number of individual and micro-party MPs

Individual Argentine political parties tend to combine into larger party alliances for electoral and parliamentary purposes. Both FpV and Cambiemos are such coalitions. Running on joint lists assists coalitions to maximise their allocations of seats under the proportionality calculations.

The two-cycle system means that major swings in the public’s support for political parties can take two electoral cycles to change the control of the Cámara and Senate. 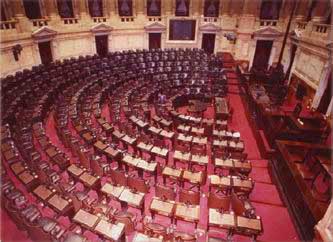 The rising Cambiemos coalition held only 68 seats after 2013 elections, but grew to 86 after those of 2015. By improving on its 2013 result this weekend, Cambiemos looks set to have an even larger Cámera delegations after Sunday.

A constellation of minor parties look set to wield influence in the legislature, however, as neither of the larger coalitions appear anywhere close to capturing the 129 seats needed for a majority

This entry was posted on October 21, 2017 by Malcolm Baalman in Argentina, Seat allocation PR elections.