Bundestag expands by over 100 seats

One extraordinary result of Sunday’s election in Germany is that the Bundestag will expand by over 100 seats to ensure that each of seven political parties has a strictly proportional share of the representation.

Under the Bundestag’s mixed member-proportional (MMP) electoral system, the number of seats in parliament must be mathematically proportional between each party that wins at least 5% of the national vote (or else wins 3 local seats).

This makes the Bundestag one of the few world parliaments without a pre-fixed number of seats. The system is intended to allocate 50% of the seats to locally elected MPs, with 50% being drawn from party lists.

MMP in Germany uses closed lists, in which the political parties specify the order of names on state-based lists for the additional places. Voters have no direct input into who is appointed to this half of the parliament.

The number of local seats is fixed at 299, but the number of party allocated seats has a minimum of 299, but can go higher.

The previous record number of party list seat allocations was 331 (instead of the nominal 299), occurring at the 2013 elections. This year there are now projected to be a massive 411 additional party list seats, taking the total in the Bundestag to 709.

Under the mathematical rules of the MMP system (as used in Germany, where the system was invented), the total number of MPs rises where more minor parties win larger shares of the national vote, but where the major parties keep winning almost all the local seats.

Seven parties passed the 5% threshold, with five of them – the major CDU, CSU and SPD parties as well as minor parties Die Linke (The Left) and the Alternative for Germany (AfD) – also winning at least three local seats. The Greens and the Free Democrats (FDP) qualified only on the 5% rule.

But since almost all the 299 local constituency seats were won by the three major parties, the seven-party proportionality requires that the seat allocations to the other four parties be scaled up from the nominal allowance of 299 extra party-list seats.

Specifically, the result is driven by the fact that the Christian Social Union (CSU), the arm of the national CDU coalition which runs in (and only in) the state of Bavaria, has won 46 local seats, while only winning 7% of the national vote (in Zweitstimmen or ‘second votes’).

In fact, based on winning around 46% of the the Erststimmen or ‘first votes’ in Bavaria, the CSU has won every one of the 46 seats in the state under the plurality (first part the post) rule – demonstrating just how distortionary plurality voting can be. 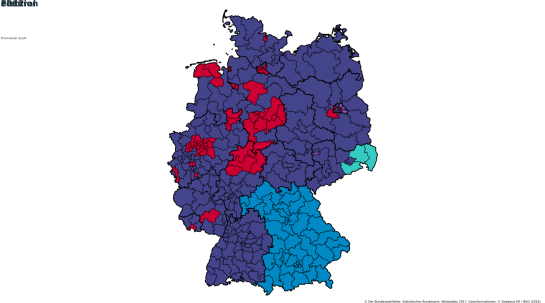 The conservative CSU party won every single local seat in the southern state of Bavaria (light blue), while the CDU (dark blue) won 185 of the 253 local seats in all the other states (image: German Federal Returning Officer)

Ironically, if parties other than the CSU has managed to win just half a dozen or so of the local divisions in Bavaria, the calculations extrapolating from the CSU’s national vote share might have seen several dozen fewer seats allocated to other parties to maintain the required overall party proportions.

That complex outcome means that all the minor parties have a positive interest in seeing the CSU sweep the field of Bavarian local seats – potentially distorting how actual ‘first votes’ are cast.

Results are not yet final, but the projections of the Federal Returning Officer indicate that instead of 299 additional party-list appointees to the parliament, there will be an aggregate of 411. The exact numbers may still shift slightly.

The share of the party delegations in the Bundestag drawn from appointments from party lists will turn out very differently for the major and minor parties.

The Bavarian CSU will receive no party list appointees. The CDU will receive just 15, made up of between 0 and 2 extra places across the 15 states where it runs candidates.

Any reliance by governing coalition career politicians to get into the Bundestag through the party lists may therefore be blocked by this result.

The Social Democrat opposition (SPD) has seen members elected in only 59 local divisions, but the party will receive an estimated 94 additional places from their party lists – a more typical result under MMP.

The radical socialist Die Linke (the Left) party won 5 seats locally (in Berlin), but will be awarded another 64 places from their lists.

The far-right AfD party won 3 local seats in the state of Sachsen (Saxony), but will be awarded another 91 seats across several states from their party lists. (One of the AfD’s three local seats in Saxony was won by former leader Frauke Petry, who has already announced that she will separate from the party and sit as an independent, which is permitted.)

The Greens won the plurality of the ‘first vote’ in just one local division, but will receive another 65 places from their party lists.

The FDP won the ‘first vote’ plurality in not a single local division, and will see all 80 of their allotted number of Bundestag members drawn from party lists.

Die Linke and AfD have the bulk of their voter support concentrated in states making up the former East Germany.

By contrast the support for the FDP and the Greens is strongest in the former Western states of Germany.

3 comments on “Bundestag expands by over 100 seats”