The Schleswig-Holstein question: Is the far-right on the rise?

As the French have been busy seeing off the National Front from their nation’s presidency, Germans have watched yesterday’s state election in the northern region of Schleswig-Holstein for indications of whether their own far-right Alternative für Deutschland party (Alternative for Germany, or AfD) is gaining support.

In yesterday’s elections for the state Landtag (parliament), the region’s two million voters appear to have ousted the previous coalition of the centre-left Social Democratic Party (SPD), the Greens and the local ethnic South Schleswig Voters’ Association (SSW) party. They have instead given the centre-right Christian Democratic Party (CDU) the most seats, and the key role of forming a new coalition to govern the state.

While the result will be welcome news to Germany’s national CDU chancellor Angela Merkel, who is improving in the polls in the lead-up to September’s national elections, Schleswig-Holstein voters have also elected AfD members to the state assembly for the first time.

AfD scored only 4.6% in the state at its last electoral contest in 2013, so its rise yesterday to 5.9%, while slight, will increase anticipation that the party can achieve the 5% threshold at the national elections.

Like other German assemblies, the Schleswig-Holstein 69-seat Landtag is filled by a mix of 35 directly elected members for local electoral divisions by plurality (first-past-the-post) voting, topped up by 34 party list nominees so that each electoral sub-region has a total number of members proportional to the voters’ party support. 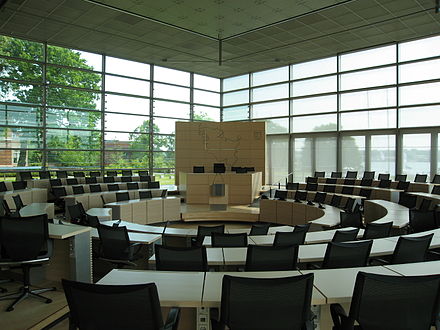 All parties with more than 5% of the vote are eligible to be awarded party list seats. However the local SSW party, representing Danish and Frisian minorities, has a constitutional exception to the 5% threshold rule, and will be awarded 3 seats despite only winning 3% of the state-wide vote.

As is almost always the case with German elections, no party has won a parliamentary majority and a coalition government must be formed.

Over recent decades German state and national governments have been formed from a variety of coalition combinations, but the major CDU and SPD parties prefer to avoid the political extremes. The Free Democrats and the Greens are the normal coalition partners.

The der Linke (Left) party has never been in a coalition, but is edging closer to acceptability.

No far-right party has ever been in a post-WWII German coalition. The AfD was only established in 2013, and has faced only a single electoral test in a national election and in most state elections.

CDU Schleswig-Holstein state leader Daniel Günther has won 25 of the Landtag’s 69 seats – all of them through wins in local districts – and needs 10 more votes for a stable 35-seat majority coalition. He can likely receive 9 votes from the Free Democratic Party (FDP), the CDU’s most frequent coalition party nationally, but would still only have a total of 34 votes, one short of a majority.

The outgoing SPD (21 seats) – Greens (10) – SSW (3) coalition could claim the same total of 34 votes, but an expanded four-party coalition may not be realistic. The CDU (32%) was clearly the plurality vote winner over SPD (27%), a factor which is normally accepted as conferring the right to an initial leadership role in coalition-forming. The CDU also won 25 of the 35 directly-elected local seats.

For national political reasons, Günther will be enormously reluctant to accept the additional vote he needs for a majority coalition from the AfD party’s 5 new Landtag members. Nor is it certain that the FDP would tolerate such a partnership.

Günther may instead look to include the Greens in a coalition. The Greens won the third-highest vote (13%) in the election, and could give the CDU the numbers for a majority coalition on their own.

Günther could even revert to the backup solution of a CDU-SPD grand alliance, as is currently governing Germany nationally.

The next electoral test of AfD support is only a week away, in next Sunday’s Landtag election in North Rhine-Westphalia, Germany’s largest state. Opinion polls there show the CDU and SPD in a very close contest on around 32% of the state vote each.

The AfD, which scored only 3.9% of the vote in North Rhine-Westphalia in 2013, is most recently polling 6% for the state election, but has been as high as 10% in the past month. The Greens, FDP and the Left should also clear the 5% threshold.

The German national elections are on 24 September.

2 comments on “The Schleswig-Holstein question: Is the far-right on the rise?”

This entry was posted on May 9, 2017 by Malcolm Baalman in Election results, German länder (states), Germany, MMP/British AMS.