Is Trump’s ‘negative mandate’ the lowest ever?

An analysis in the New York Times has given Donald Trump’s selection as US president among the lowest ‘mandates’ of popular support in US history.

Trump was confirmed today as the choice of the US Electoral College, despite one Republican and several Democratic college members attempting protest votes.

The analysts rate Trumps’s Electoral College result in 2016 as the 46th out of 58 contests, and they rate his actual popular vote comparison against his main opponent as the third lowest ever. 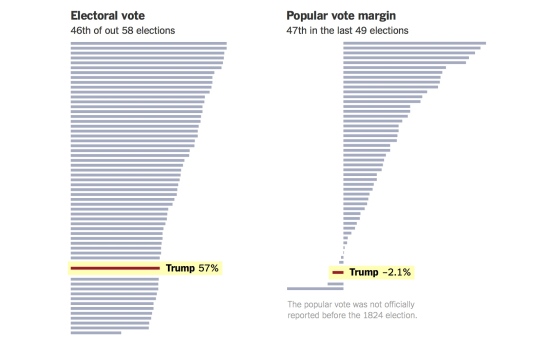 There have been 58 US presidential elections since 1788-89. Trump’s 2016 capture of 57% of the available presidential Electoral College places ranks as the 46th-highest (which is to say, the 13th-lowest).

Electoral College numbers are typically quite exaggerated compared to the actual popular vote results, due to the subdivision of the national electorate into states.

But Trump is also one of those rare ‘winners’ who actually lost the popular vote. Patel and Andrews rate him as the third least-supported president (in comparison with each leading opponent) ever to be an Electoral College winner. 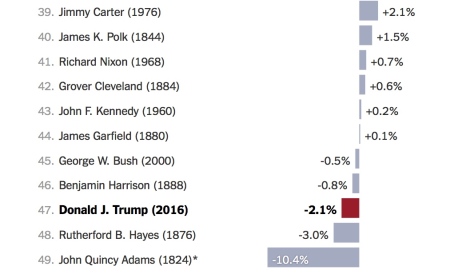 Patel and Andrews’ analysis leaves out the first nine presidential elections from 1789 to 1820, because popular vote results were not fully recorded for these elections.*

(All US election results prior to 1920 make for democratically doubtful comparisons. Property qualifications on voting in some states continued into the early 19th century. The right to vote of African Americans was largely non-existent until after the Civil War – and remains hindered to this day – and women only had the right to vote in numerous states from 1916 and then universally from 1920.)

Of the 49 elections that Patel and Andrews compared for popular vote support between the top two candidates, Trump is in third-lowest place, ‘behind’ only presidents Rutherford Hayes (1876) and John Quincey Adams (1824).

And of the 49 results, Trump in 2016 is also one of only five cases where the president who took office was actually beaten by the other leading candidate in the national vote.

Because US presidential votes are counted state-by-state, such ‘inversion’ results are possible. Differences in the geographic distribution of partisan voters around the country can cause overall upsets. Basically, in this kind of electoral system it is a disadvantage to have too many supporters concentrated in too few states.

In subdivided elections, the mid-point of probability for an overall win should still favour the nationally most popular candidate, but in close elections the final outcome can fall either way.

The negative-mandate Electoral College wins of George W Bush (2000, -0.5%) and Benjamin Harrison (1888, -0.8%) can be regarded as electoral system misfortune. The sub-1% national vote wins by James Garfield, John F Kennedy, Grover Cleveland and Richard Nixon could also easily have fallen the other way in terms of Electoral College outcomes.

But is Trump really the third-lowest mandated president ever – or is the 2016 result actually even worse by historical comparison?

Donald Trump’s nominal figure is less dire than those seen at only two other elections: 1876 and 1824.

The presidential election result in 1876 was in several states a genuine fiasco. Nominal results had Democrat Samuel Tilden with just below 51% of the total national vote, 3% clear of Republican Rutherford Hayes. But in the southern states egregious levels of violence and intimidation has been deployed by the Democratic party (sic) to keep black voters from the polls.

While unprovable, historians generally surmise that a popular vote total based on fairly conducted elections would have seen Tilden’s 3% lead evaporate, and Hayes most likely be recognised as the rightful winner of the total national popular vote.

Hayes was eventually made president after bitterly disputed returns in three of the southern states gave him just enough Electoral College votes (a majority of 1!) to take the presidency. (The wrangling and political compromising over the three disputed state results ultimately allowed the southern Democrats to dismantle several post-civil war restrictions, among other results leading to decades of suppression of voting by African Americans – but that’s another story).

In any case, historic analysis of the facts of the 1876 affair indicates that Hayes should be lifted up from the second-lowest place on the New York Times‘ table to somewhere around 4 or 5 places higher.

That leaves only John Quincey Adams in lowest place, when he was chosen as president in 1824. But that too was a unique election.

The first election to break from the gentlemanly succession transitions of the first five US presidencies, 1824 saw an outsider – southern general Andrew Jackson – take on no less than four establishment politicians – three competing members of retiring President James Monroe’s Cabinet and the Speaker of the House of Representatives.

This included the Secretary of State (Adams, strong in the New England states), the Secretary of the Treasury (William Crawford, strong in Virginia and Georgia) and the Secretary of War (John Calhoun from South Carolina). House Speaker Henry Clay was strong in mid-west states. Clay was not a member of the Monroe government – although he was later induced to join the Adams’ administration after the election.

Calhoun eventually pulled out and angled for the Vice-Presidency. Of the four remaining contenders on election day, the newcomer Jackson led the national popular vote results with 41%, with Adams on 31%, Clay on 13% and Crawford on 11%.

When the House came to determine the issue, the ‘establishment’ congressmen closed ranks, and narrowly chose Adams over an outraged Jackson. (Jackson got his revenge, winning the election rematch against Adams four years later).

In terms of mandate, in 1824 the establishment candidates, the original voters, the Electoral College delegates and the House members supporting each of Jackson’s opponents would broadly have agreed on stopping Jackson from becoming president, and between them they collectively outpolled Jackson 55% to 41% in initial popular vote support.

Had Adams faced Jackson in a one-on-one contest between major party nominees in the modern style, it is highly probably that he would have been the winner.

Taking all that history into account, Adams should also be elevated in the raw rankings of ‘least victorious president ever’, probably by as much as 10 places.

And that leaves Donald Trump’s 2016 result dead last, with a net negative-mandate rating of minus 2.1% of the vote – a statistical result significantly higher than the remaining two ‘negative winners’ – George W Bush and Benjamin Harrison – and one that will prove hard to match. 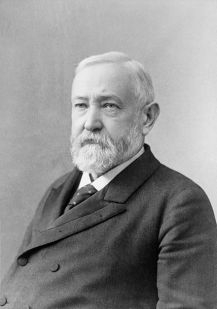 23rd US President (1789-93), Republican Benjamin Harrison, who lost office after a single term as a result of supporting the imposition of high tariffs to try to protect US industries from foreign competition – and also for excessive federal government spending.

After 128 years President Harrison has lost to Donald Trump what was probably – taking historical knowledge into account – the historical record for the lowest popular voter two-candidate ‘mandate’ to take office ever recorded at an election.

*(For the first nine US presidential elections – those from 1788 to 1820 – some reliable estimates of the popular vote do exist. George Washington’s two selections were uncontested, and five of the other nine early elections were genuine landslides. Only the elections of 1796 and 1812 were even close in known popular vote terms. There is no historical evidence contradicting the conclusion that the most popular candidate became president on all nine of these occasions.)