A failed attempt at electoral reform by referendum has resulted in the resignation of the Italian Prime Minister, Matteo Renzi.

Italy’s constitutional system has the unique feature of the government simultaneously answering to both houses of the national Parliament – the Camera dei deputati (Chamber of Deputies) and the Senato (Senate).

Each of the two chambers is directly elected at the same time for five-year terms.

The Camera is elected by a party list seat allocation system, where seats are allocated within 100 electoral divisions to each coalition of political parties that wins more than 3% of the national vote.

The Italian system – who has long struggled with a fragmented political party culture – also distort the numbers in the Camera by a rule that automatically allots a minimum 340 of the 615 seats in the Camera (around 54% of the seats) to whichever coalition wins the largest national vote share, even if it is well short of 50% voter support.

A coalition can win more than 340 seats if it wins a substantial majority of the national vote. 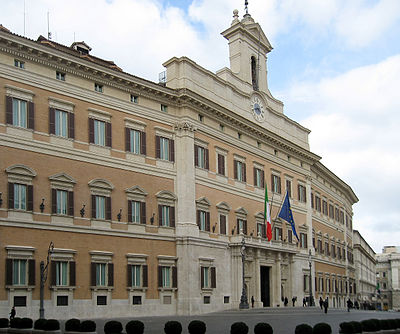 All recent Italian governments have been party alliances, and the 340 (or more) government seats are allotted proportionally among the parties making up the alliances.

The other opposition parties which pass the 5% threshold to become eligible for seats are then allocated the remaining places in the Camera, in proportion to their vote shares among each other.

Voters previously had no direct say in specifically who was appointed as members of parliament, with each party determining its own parliamentary individuals through the ‘closed party list’ method.

But a recent electoral law provides that in future elections the system will allow parties to impose one candidate at the head of the list in each electoral division, while voter selections will determine the remaining successful candidates – still within the party list approach.

The Italian Senato is elected separately in each of Italy’s 20 regions through in a system similar to that used for the Camera, except that the largest coalition – which again is allotted a minimum of around 55% of seats – is determined in each region separately.

The result is that the two houses of parliament may have different political make-ups, even if elected at the same time.

Since the national government needs to simultaneously maintain the confidence of both houses, the result is usually politically difficult and often chaotic.

The 2013 elections saw three coalitions win parliamentary seats, with the centre-left Democratic Party securing the largest-coalition bonus, giving it 340 seats in the Camera.

But two rival parties – centre-right Forza Italia and the populist Five Star Movement – shared with the governing party a three-way balance of the seats in the Senato.

The election was fought on prior laws with a 5% coalition seat threshold and fully closed party lists, denying voters any say in who became individual members of parliament.

New Prime Minister Renzi emerged from negotiations in early 2014 to head a Democracy Party government, and his government set out to finally reform the constitutional and electoral system after decades of criticism.

The government’s plan was based around a change in the fundamental nature of the Senato, making it a smaller body consisting of appointed mayors and councilors from each region. The new Senato would have reduced legislative powers and, crucially, would no longer have a role in the formation and removal of executive governments.

The electoral system for the Camera would maintain the current automatic-majority device, although the new electoral law adopted early in 2016 would introduce the partly ‘open’ list approach to individual candidates and the lowered 3% party threshold for seats.

Critics pointed out that this would not merely calm the distressed state of Italian government security of tenure, but would actually lead to dominant executive governments that would not be effectively accountable to either house of parliament.

The plan required a constitutional referendum, and Renzi staked his reputation on the campaign by threatening to resign if it failed.

Unfortunately for Renzi’s tactics, the vote quickly came to be sidetracked into a poll on the standing of the government – which like most Italian governments is not strong in the electorate.

Many voters were drawn to see the proposed reforms as a further grab for power by the political class, a criticism given credibility by the obvious increase in executive control.

The campaign has also been seen as tied up in criticisms of European integration and other issues.

Both opposition parties fought the referendum vigourously from different perspectives, leaving the government triangulated between both its political enemies.

The vote appears to have been around 41% “Si” to 59% “No”. There were strong majorities for “No” in the industrial north and the rural south of Italy, with only a few central regions backing the reform by majority.

Italy is not due for another election until 2018, so Renzi’s replacement may be either a new leader from the Democracy Party, or possibly a technocratic government brokered by the nation’s independent President – a common Italian solution to political crises.

Media reports: The Conversation, before and after the vote; BBC news.