While most attention is focussed on the race for the White House, Americans in 11 states will also be electing their state Governors on November 8.

Almost all US state governors serve four-year terms, and the majority of states deliberately avoid holding their elections in the same year of the four-year cycle as the presidential elections.

All US governorships are elected using the plurality voting method. Republican and Democratic party candidates win almost all these elections, although independents have occasionally in a few states.

At present a decisive 31 governorships are held by Republicans and 18 by Democrats, while Alaska’s Governor Bill Walker is an independent.

Of the 11 governor elections taking place this year, 7 governorships are held by Democratic party governors, and 4 by Republicans.

Seven of the governor elections are generally regarded as safe for the party currently occupying the official mansions*. 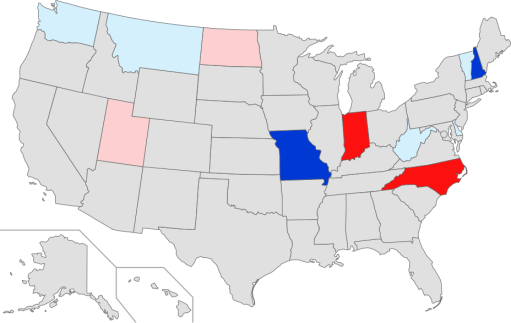 Only 11 governorships are up for election this November; the four states shown in strong colours are generally seen as the close contests

Of the four states where the closest contests are taking place, two are being defended by each party.

In Missouri Democratic Governor Jay Nixon is retiring, and the contest will be between Democratic candidate and state Attorney-General Chris Coster and Republican Eric Greitens. Polling has consistently favoured Coster, but not by large margins.

Indiana’s current Governor Mike Pence has foregone a re-election bid to run for US Vice-President as Donald Trump’s running mate. Lieutenant Governor Eric Holcomb will attempt to retain the state for the Republican party against Democrat John Gregg, who was narrowly defeated by Pence in the 2012 election. Polling in the past two months has consistently favoured Gregg to win, with his lead peaking at 12 points in early October but easing back slightly in recent days.

In New Hampshire incumbent Democratic Governor Maggie Hassan is stepping down to contest a US Senate seat. Colin van Ostern will contest the election for the Democratic party against Republican Chris Sununu. Polling favoured Sununu consistently from April until early October, but in the past fortnight support has shifted significantly in Van Ostern’s favour.

Finally, in North Carolina controversial Republican Governor Pat McCrory is making heavy work of his re-election bid against his Democratic opponent, state Attorney-General Roy Cooper. The race has been extensively polled over the past twelve months with very mixed results, but since late September almost all the polls have shown Cooper winning the state for the Democrats.

The net change in 2016, based on current polling, is therefore for the Democratic party to pick up the governorships in Indiana and North Carolina.

The current Republican governors in both these states – Pence (Indiana) and McCrory (North Carolina) – were involved in political controversies about gender-related civil rights in the past year, which events have been identified with their noticeable loss of support in opinion polls.

Governor Pence was also thought to have low odds of retaining his governorship at the point in July this year that he was selected as Trump’s running mate.

Some analysts also consider the Democratic-held governorships of West Virginia (held by Earl Ray Tomblin) and Vermont (where the sitting governor is retiring) to be under possible threat from Republican challengers.

(* Hat tip to Reg Jones for correcting the usage of the term ‘statehouse’ in the original post.)

This entry was posted on October 22, 2016 by Malcolm Baalman in Current issues, Executive government formation, United States, US governors.