Donald Trump today easily won the Republican party primary election in Indiana to be the party’s nominee later this year for US president.

Trump won 53% of the vote over his main rival Senator Ted Cruz on 36%.

Turnout of voters in this years’s Republican event was dramatically increased on recent elections, with almost a million votes recorded compared to 635,000 in 2012 and 412,000 in 2008.

The most significant immediate result is that Senator Cruz has announced his withdrawal from the race.

All attention will now focus on Trump’s momentum and the initial appearance that he has wrapped up the nomination. He should now hold just over 1,000 delegates, with his largest remaining rival Governor John Kasich on just 155. A majority of 1,237 delegates is needed to secure the nomination.

But Cruz’s formal withdrawal may leave one remaining option for Trump to be stopped. The final states to hold primary elections will now open up the one form of competition that Trump has not faced since the election period began in February: contests against just one single opponent.

The desire of many in the Republican party to avoid nominating Trump was also being blocked by the major problem that the clear second-placed candidate – Cruz – was loathed by many in the establishment, and was not being embraced by the wider public.

If the party could unify quickly behind an alternative ticket formed around Kasich, and if it were supported by the convention delegates elected for Cruz (around 550) and Senator Marco Rubio (around 177), together they would make up a block of around 880 delegates. 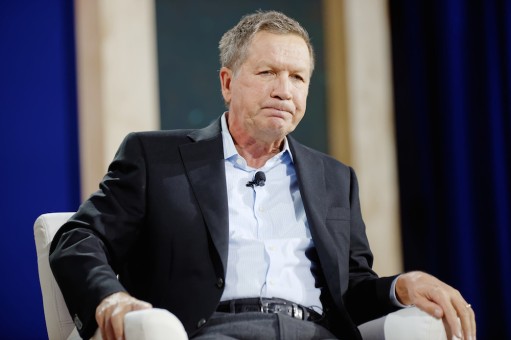 Such an alliance would still be behind Trump’s tally, but it would be within striking distance. With around 400 delegates yet to be won in the remaining nine state elections – mainly under winner-take-all conditions – overtaking Trump is now actually easier than it was when Cruz remained in the race, holding second place but representing the extreme of the party’s base.

The Trump alternative assumes, of course, that the three anti-Trump campaigns are willing to combine, with Cruz accepting that he is not their lead candidate. A ticket combination of Kasich-Cruz, or Kasich-Rubio, or Kasich-anybody, would need to be assembled.

Of course such an alliance, with Kasich as its figurehead, would also need to actually start beating Trump in the remaining nine primary elections. Trump has averaged around 40% of the vote through the season so far, but in the past fortnight he is clearly winning over 50% of the vote.

A Kasich ticket would also have a problem with the existing party convention rules, which require a candidate to have delegate majorities in 8 states to put their name forward. An alliance of campaigns could probably contrive to meet this requirement, but it would be of questionable legitimacy.

There are powerful forces within the party and its donor community that badly want to stop Trump, and many who also calculate that Trump is destined to lead the party to a serious defeat in November. Democratic party strategists are reportedly delighted that Trump will be their opponent.

However even a well-orchestrated alliance to take the nomination off Trump faces the problem that the political cost with the public might simply be too high. Since Trump is now obviously the most successful of the candidate campaigns, any combination to defeat him would give him the valid complaint that he was robbed of the nomination, triggering a vicious voter backlash.

Stopping Trump would require the legitimacy of a series of clear election wins in the final nine states. And it would require the Kasich-based offering to the voters to credibly unite and make a clear pitch to voters very fast.

Kasich, on his own, will be under pressure to give up the game himself in the hours and days ahead. The media have been reporting widespread party acceptance of surrender to Trump’s success and momentum, allowing him his chance to lead the party to the election.

Late on the night of the Indiana results Kasich released a statement declaring that he remains in the race, saying “Our strategy has been and continues to be one that involves winning the nomination at an open convention”.

There is just one feint pathway left to stop Donald Trump winning the Republican nomination. Kasich will be thinking about overnight, and so will others. This can’t drag on for weeks with any credibility. In the next few days Kasich and the anti-trump forces will need to formally coalesce, or else disperse.

This entry was posted on May 4, 2016 by Malcolm Baalman in United States, US presidential primaries.