Five state primaries in the US north-east have made Donald Trump and Hillary Clinton their parties ‘presumptive nominees’.

Votes held in Rhode Island, Connecticut, Pennsylvania, Delaware and Maryland have been decisive.

On the Democratic side, Hillary Clinton defeated Senator Bernie Sanders in four states – in Delaware and Maryland by over 20%, and in Pennsylvania by over 10%.

With around 70% of the primaries now over, Clinton has been leading Sanders in support among Democratic primary voters by 56% to 42%. It is estimated that to overtake her now, Sanders would need nearly 80% of votes cast from here.

Clinton, however, is polling ahead of Sanders in the largest remaining state, California. She also has the support of an estimated 450 of the roughly 500 unelected convention delegates to fall back on.

From here on the remaining results will trickle in weekly: Indiana on May 3, West Virginia on May 10, Kentucky and Oregon on May 17, and then a two-week break until California and 5 other states on June 7.

The talk will now turn to how Sanders will end his campaign, and what influence in the party he will earn from how that transition is handled.

On the Republican side, Donald Trump had five massive wins yesterday, with the lowest lead over his best rival being a massive 29%.

Opponents John Kasich and Ted Cruz shared the remainder with votes mostly in the 15%-20% range. Interestingly, Kasich beat Cruz in four out of five states.

The Republican race’s voter turnout has left the previous party record of 20.0 million votes far behind, already reaching 25.1 million. With California to come and still in play, it should reach 30 million votes with ease.

Trump has so far won 40% of all Republican votes. Ted Cruz for the religious right has won 27%, while the aggregate of the ‘establishment politician’ campaigns has won around 30%.

While Trump has claimed the presumptive nominee status, the nation is left speculating about whether he will actually reach the conclusive target of 1,237 Republican convention delegates. His tally is now 941 to Cruz’ 556 and Kasich’s 155. (Withdrawn candidate Marco Rubio also holds 177 delegates.)

The remaining races include proportionally-allocated Oregon and Washington. Even on a major form slump Trump can expect a minimum of 40 delegates from these two. 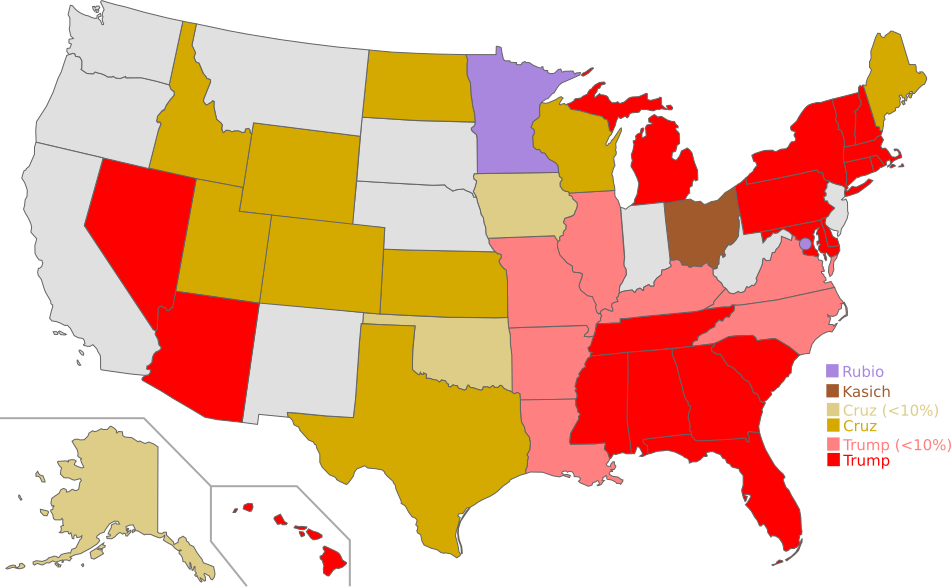 The Republican race has more of an east-west divide (nb: the caucus states of Wyoming, Colorado and North Dakota are shown for Ted Cruz on the basis of delegates secured)

In Indiana, (57 delegates) and California (172) delegates are allocated mainly to winners in each congressional district. Again, even a major slump in Trump’s vote should allow him over 100 delegates from these states. On current polling he should do much better than that.

(Update: according to Adrian Beaumont at the Conversation, of the 54 unbound Pennsylvania delegates elected yesterday Trump has the clear loyalty of 21 and the conditional support of another 21 – another 42 votes towards the 296 Trump still needs.)

There are no signs of a form slump by Trump. Indeed, he appears to picking up support in the past few weeks.

The results will trickle in in the coming weeks, from Indiana (May 3), Nebraska (May 10), Oregon (May 17), Washington (May 24), and California and the remainder of states on June 7.

West Virginia’s delegates, like most of Pennsylvania’s, will not be bound to individual candidates.

On probabilities, the range of results for Trump should be somewhere between 50 votes below the target and 100 votes above it. He will be hundreds of votes ahead of Ted Cruz’ best possible final tally.

The other reality is that second-placed Ted Cruz campaign appears to be stalling.

The rules of delegate loyalty at the party convention are, it has been widely reported, potentially coming apart under the pressure of local politicking. Even a nominal majority for Trump could come unstuck at the convention.

But if that happens, the reaction of Trump and his millions of supporters will be highly toxic.

While his margin may be narrow, the political cost of Trump not becoming the Republican nominee may now be too great to overcome.

This entry was posted on April 27, 2016 by Malcolm Baalman in Current issues, United States, US presidential primaries.