Irish not sure who should govern

The lower house of the Irish parliament – the Dáil Éireann– has yet to endorse a government for the country 40 days after voters elected the most politically diverse Dáil since the nation was established in the early 1920s.

The Irish people voted on 26 February, but the nation’s two leading political parties – Fine Gael and Fianna Fáil – scored just 25% and 24% of the vote respectively.

Of the 158 Teachtaí Dála (TDs, or members of parliament) elected, Fine Gael won just 50 seats (down from 66) and Fianna Fáil 40 (up from 21). The Sinn Féin party won 23 seats (up from 9), while Fine Gael’s former coalition partner the Labour party won just 7 (massively down from 33).

Participation in the election was down slightly compared to recent elections, with just 65% of registered voters turning out.

The Dáil is directly elected by the single-transferable vote method, with voters listing ordered preferences between individual candidates in 40 electoral divisions that elect 3, 4 or 5 members depending on their population.

The system gives all voters a fairly equal influence on the election of representatives, and compared to single-member division electoral systems it also gives many more voters a representative of their favoured political party (although this advantage is limited by the small numbers of seats available, especially in the 3-member divisions).

Around 47% of Irish registered voters are represented in the new Dáil by a TD of the party to which they gave their first preference vote.

This result compares favourably with equivalent results at the most recent lower-house election results in nations that use single-member election systems, such as the UK (33% in 2015), Canada (33% in 2015), the United States (a miserable 23% in 2014) and Australia (44% in 2013, even with compulsory voting in effect).

The diverse representation chosen by the Irish people this year means that the notion of a mandate to govern for the coming term is clouded. The outgoing Taoiseach (prime minister) Enda Kenny has accepted that his coalition has been soundly rejected, but it has been unclear for 5 weeks what combination of parties might replace it.

On 6 April the Dáil met to attempt to elect a Taoiseach, but votes to test support for the leaders of both major parties – Kenny and Fianna Fáil’s Micheál Martin – both failed to reach the required majority. 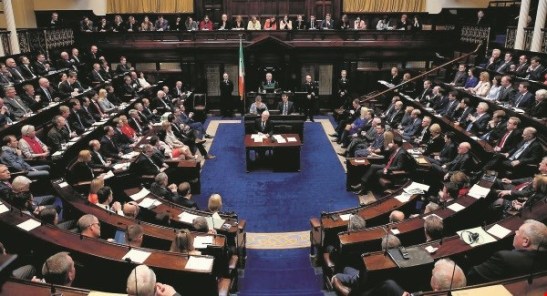 The Dáil met on 6 April, but chose no Taoiseach (image: Irish Examiner)

In response, the two main parties have begun negotiations to form a power-sharing government together. Many commentators have called for this solution – used previously in Germany and some other European nations, most recently Spain – on the basis that it is the only two-party coalition that creates a parliamentary majority.

Kenny has indicated that he would like at least some independents to join the government, to add to its legitimacy.

But the deal would require Fine Gael to throw over their long-term allies Labour, which – like the Liberal Democrats in the UK after their 2010-15 coalition with the Conservative party – seems to have borne the brunt of the vote shift away from the outgoing coalition government.

No party has been prepared to countenance union with the third-largest party, Sinn Féin.

Historical feelings run deep between the three largest parties. All have their origins within the early Sinn Féin movement that fought for the nation’s independence from Britain in 1922. As Sinn Féin subsequently divided during the civil war and other events in the 1920s, first Fine Gael (originally named Cumann na nGaedheal) and soon after Fianna Fáil emerged from the turmoil. Between them the two parties have governed Éire ever since.

The remaining Sinn Féin itself was long regarded as being beyond the limits of political respectability due to links with the IRA, before largely dissolving in the 1970s and then reforming itself in the 1990s as a modern political party in both Éire and Northern Ireland. The party’s voter support rose from 10% to 14% at the recent election, but the other parties are still reluctant to deal with it.

If the major party coalition does form in the days ahead, Sinn Féin will be entitled to become the formal Opposition, from which position it may be able to further increase its respectability and its public support.

Labor has already indicated that it will seek to bring the minor left-of centre parties together as a separate opposition unit.

Éire’s people, still recovering economically from the recent major recession, are clearly restless with their political parties. The proposed power-sharing option is likely to substantially transform the nature of the nation’s party system.

3 comments on “Irish not sure who should govern”