From here on in: the Democratic nomination 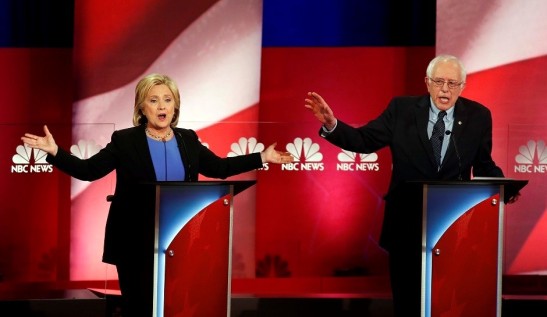 “Hillary Clinton is almost certain to reach the party convention well in the lead over Bernie Sanders, but not with an absolute majority. The votes of the unelected delegates will determine the nomination.” (image: inquisitr.com)

The US presidential nomination races of the Democratic and Republican parties are now two-thirds complete.

With a two-week break until New York state votes on April 19, this is a good time to review where the races are positioned, and how things can be expected to pan out from here on.

First, the Democratic party race – which is the simpler of the two. (See also a matching post on the Republican race.)

After the recent Wisconsin vote on 5 April – won by Senator Bernie Sanders but only gaining him a net 10 delegates – 36 of the 57 scheduled state and territory delegate selection events have now been held.

Just over 50% of the convention delegates who will choose the Democratic nominee for president have now been chosen at primary events. Around 15% are made up of the unelected party officials, governors and members of congress.

That leaves around 35% of the delegates to be elected in the remaining 21 events.

The Democratic convention – scheduled to meet in Philadelphia from 25 July – has a total of 4,764 delegates. Former Secretary of State Hillary Clinton leads Senator Bernie Sanders 1,286 delegates to 1,073.

In addition, of the 710 unelected delegates (the 15% just mentioned) around 210 have declared for Hillary Clinton to just 7 for Bernie Sanders, giving her a real lead of 1,496 to 1,080 delegates.

The vote plurality winners by state follow a distinct pattern, with a clear north-south divide. Four states – Iowa, Missouri, Illinois, and Massachusetts – form a boundary zone where the vote of the two leading candidates was within 1% (Clinton being narrowly ahead in each case).

Bernie Sanders has shown a remarkable superiority in caucus states, while Clinton has won most of the primary elections. Sanders’ only primary election wins in large-population states have been those in Michigan, Wisconsin and Washington. Clinton has not led in a caucus state since narrowly winning Iowa and Nevada at the very beginning of the season.

As for the voter turnout, the 2016 Democratic primary vote total is currently at 16.8 million votes. It won’t beat the historic 35 million votes cast in the epic Obama-Clinton battle of 2008, but this season is well on track to secure second place, beating 1988’s 22.7 million votes. The fact that California voters will still be influential on the final day of the season will most likely generate a historic turnout in the nation’s most populous state.

In short, Hillary Clinton is almost certain to reach the Philadelphia Convention in July well in the lead over Bernie Sanders, but not with an absolute majority of delegates. The votes of the unelected delegates (also known as ‘super delegates’) will determine the party’s nomination.

To win the Democratic nomination outright under current rules, without needing to rely on any unelected delegate support, a candidate needs around 59% of votes throughout the season. Clinton has been winning 56% of votes to date.

One of the advantages (and attractive features) of the Democratic delegate selection process is that every state allocates delegates in proportion to the vote won by each candidate.

This allows us to set out some reasonable projections about delegate counts as the final stages of the season unfold.

Leaving aside the Wyoming caucuses (9 April), the next big Democratic event is the New York primary – in Hillary Clinton’s home state – on 19 April.

On current polling Clinton will win this big state over Sanders by around 53% to 42%. The resulting tally of convention delegates should reach around 1,435 for Clinton to 1,185 for Sanders.

Then follow the primaries in five other north-eastern states (Maryland, Delaware, Pennsylvania, Connecticut and Rhode Island) on 26 April. Clinton should expect a modest lead overall, but these results could be close, and the state of the race won’t shift very much here. Median estimates for the two tallies after this event would be around 1,680 for Clinton to 1,320 to Sanders.

Then follows a slow-news period of almost a month, with a scattered mix of western and northern state primaries and three overseas territories voting between 3 May and 5 June. These might, in total, be slightly more favorable to Sanders. Our ability to predict delegate tallies from here is a bit wobbly, but final estimates of 1,830 for Clinton to 1,430 to Sanders after Puerto Rico votes on 5 June would be reasonable.

The target for a majority at the convention is 2,383 delegates, so Hillary Clinton has no chance of securing a win before 5 June, unless she could secure an unlikely tally of around 550 out of 710 unelected delegate endorsements.

And that leaves the race hanging undecided for the biggest date of the season – 7 June, when primaries are to be held in six states including the biggest of all, California, as well as New Jersey and four smaller western states.

Isolating out California, and adding in estimates for results in the other five state primaries on 7 June, Clinton should otherwise still hold a lead of around 400 delegates.

And then finally, if California’s massive harvest of 475 delegates goes according to current polling – Clinton leading by 47% to 38%, with a noticeable undecided vote – Clinton should finish the season leading Sanders by around 2,230 delegates to 1790.

The final anti-climactic primary event – the 20 delegates from Washington DC elected on 14 June – will probably look like a minor issue compared to public speculation at this point about what the unelected delegates will do.

What all that means is that on current polling, Clinton will finish the primary election races well in the lead, but still needing at least 150 of the 710 unelected delegates to secure the nomination. She already has more public endorsements from this latter group to do that, and in the circumstances many of the remainder will have little trouble siding with her in a clear-cut result.

Sanders and the millions of supporters he has attracted to his impressive campaign will need to be placated, but the result should be clear.

What would it take for Sanders to overturn this projection? To start with, he will absolutely need to end up in front of Clinton on elected delegates, to create the moral case for unelected delegates who are undeclared to swing behind him at the convention.

What that would require is a bit hard to calculate but, having trailed Clinton 41% to 57% in primary voting through the first two-thirds of the season, he probably needs to beat her by around 62% to 38% for the last third.

With New York in her corner and hard for her to lose now, the result for Sanders in all other states must be even greater. It’s an enormous ask, and there is no polling evidence to support the prediction that he will achieve such a target.

Moreover, Sanders may need to be more than just a few delegates in front to overcome Clinton favoritism among the 710 unelected delegates.

This very challenging target explains why most polling agencies – as well as prediction markets such as the Iowa Electronic Market – are now certain that Hillary Clinton will become the Democratic party nominee for president.

The Iowa Electronic Market’s price graph for the 2016 Democratic presidential nomination as at 6 April.

This entry was posted on April 7, 2016 by Malcolm Baalman in Current issues, United States, US presidential primaries.