The Democratic and Republican party nominees for President are chosen at their respective party conventions.

The conventions consist of thousands of delegates – 4,764 for the Democrats, 2,773 for the Republicans.

Most party convention delegates are elected in primary elections held in each state. In 2016 the Democratic convention will be 85% elected, and the Republican convention 81% elected.

The remainder are the several hundred unelected delegates, including national members of congress and party officials. Almost all of these are, however, also associated with a specific state.

The size of the state delegations starts out being broadly proportional to the populations of the states, but each party changes that proportionality in various ways. Both parties add an equal number of places – usually 3 – to each state, which introduces an element of small-state biasing.

They also give extra places to states where their political support is strongest. They add places for elected congresspeople, award bonus places based on past voting results, and  so on.

The result is that each of the two conventions is made up of delegations which are disproportional to the state populations themselves.

The Democratic party convention, for example, has a noticeable delegation bias towards Maryland and the New England states, as will as the Pacific northwest. The northern Mountain states, Alaska and Hawaii are also advantaged. Most of these states get some of their advantage from the inbuilt small-state biasing.

The biases towards these states must come from somewhere. In fact they come at the expense of bias against various other larger states, the main example being Texas. 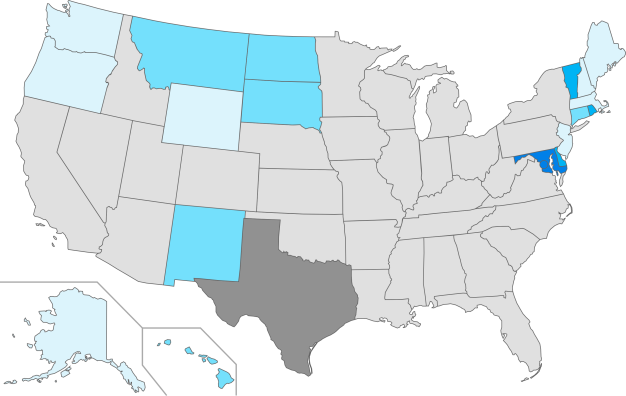 The Republican party convention shows somewhat more disproportionality than the Democratic one. Here the large states of California, Florida and New York are significantly disadvantaged (Texas much less so), allowing room for significant biasing towards more than half of all other states. The pattern is more scattered, but there is noticeable favouring of a sweep of states from the deep South up though the midwest to Idaho. Once again, small-state biasing explain some of the disproportionality.

All the mathematics behind these biases seems to make a rough sense. Convention places are being relatively weighted towards where each party’s support seems strongest.

Of course the largest states still generally have the most delegates, but the existence of these built-in biases are certainly giving some voters more influence than others. It means the conventions are certainly not elected on the basis of one-vote-one-value.

But perhaps what is odd is that the biasing bears little relationship to the marginal or ‘swing’ states, where the real election will actually be decided.

In 2012 just ten states saw the vote shares of the two parties closer than 7%: North Carolina, Florida, Ohio, Virginia, Colorado, Pennsylvania, Iowa, New Hampshire, Nevada and Wisconsin. These states are where the result of the 2012 presidential election was determined.

Voter opinion in almost all these states are actually disadvantaged in the way both party conventions are elected, and therefore their presidential nominees pre-selected. New Hampshire is the sole exception; a contestable state which, mainly because of small size, benefits from delegate bias in both conventions.

If you were going to give some voters relatively more say than others in pre-selecting the national candidates, would it not make more sense to give the greater say to those who will matter more in the final election?

Obviously the parties are currently preferring the former vision. The selection systems favour a flag-bearer for party causes over a moderate who appeals to the political centre. This means more ‘extreme’ politicians are coming to dominate the nominations for each party. This applies to congressional and state elected offices also.

It’s probably fair to say that the polarisation is stronger on the Republican side than among the Democrats at the moment.

But both of America’s two main political parties are becoming increasingly politically polarised. This growing partisan distance is affecting the conduct of their representatives in congress and in many ways making it harder to legislate and govern in America.

Of course in the United States all voting is voluntary, and some will argue that candidates who try to appeal to the political middle ground might lose more votes – through their base staying at home – than they gain.

Complicating matters further, polling shows that a substantial proportion of voters are angry with their own side of politics, and are actively supporting anti-establishment candidates. Voters with these opinions – supporters of Donald Trump for the Republicans or Bernie Sanders for the Democrats – are adding to political partisanship a cross-motivation based around disapproval of current party performance.

The result is highly unpredictable. We are yet to discover how much these outsider ‘insurgent’ candidates might appeal to the middle political ground where elections are won. If one party chooses an outsider, will that bring it a reward of voter support that crosses partisan lines? And what happens if both parties select insurgent nominees?

In the case of Donald Trump, there is growing research that his appeal to economically disadvantaged working white people, who are generally favourable to progressive economic and social policies, might many over many voters who traditionally vote for Democratic presidential candidates.

US presidential elections are probably the most complex procedure in the democratic world. A well-functioning electoral system should allow voters to consider clear alternatives and find a mechanism for allowing the many diverse points of view in the electorate to work through the options towards a result which will have general legitimacy.

The complex impacts of tactics, timing, momentum effects, exaggerated attack politics and massive advertising expenditure all work to manipulate the choices Americans exercise in choosing their presidents. Preliminary process of filtering – including candidate selection procedures – do not necessarily increase voter choice; in fact by the end of the exercise they can reduce choice.