On the Prime Minister’s advice, the Governor-General of the Commonwealth, Sir Peter Cosgrove, will dissolve both the House of Representatives and the Senate on Monday 9 May. Elections for both houses will be called for Saturday 2 July.

The House is dissolved at each election, but normally the Senate is not formally dissolved. Senators serve six-year terms in two overlapping three-year cycles, with all terms starting on a 1 July every third year and ending on 30 June six years later.

In a standard election, 40 of the 76 senators (6 for each state and two for each territory) are elected. The 36 newly elected state senators are then ready to take up their seats on the following 1 July for six-year terms. The 4 territory senators however take office when the Parliament resumes after the election, and their tenure is linked to the three-year term of the House.

At this election the Governor-General has taken the rare step of a full dissolution of the Senate, due to the existence of three bills which the Government has twice failed to persuade the Senate to pass. 12 senators will be elected in each state, together with the same two for each territory.

After the election the 12 senators for each state will be divided into two groups of six. One group will serve six year terms backdated to the coming 1 July, while the other will serve three year terms starting on the same date. In this way the two-cycle rotation of Senate seats will be restarted. For a description of how the two groups of senators will be determined, turn to the comprehensive explanation by the ABC’s elections expert Antony Green.

The House of Representatives will be elected in its normal manner. Outlines of the voting systems for the two houses – and their outcomes – are set out below.

The 8-week campaign will unusually long by Australian standards. To understand and keep track of it, there are several excellent election sites in Australia. Antony Green has published a comprehensive background and preview of the election, including analysis of the states and the key marginal seats.

If you are a Crikey subscriber – which is greatly to be encouraged – William Bowe’s PollBludger will track election polling and predictions for you, as will the Guardian’s new Poll of Polls page. Detailed monitoring of seat prospects and polls will be found from Tasmania’s Kevin Bonham, Ben Rau’s Tallyroom, and Antony Green’s home at the ABC.

This site will focus less on polls and politics, and more on the functioning of the electoral system itself at generating quality representation of the electorate, and the effects that the system has on politics.

The House of Representatives 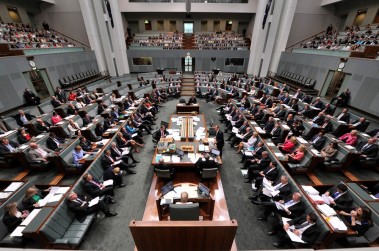 The House of Representatives consists of 150 members, elected for terms not exceeding three years from the date of the first sitting of the House after each election.

Australia has the parliamentary system of government. Government is formed by the member of the House who at any time holds the confidence of the House to be Prime Minister. Governments can therefore potentially change mid-term between elections.

Prime Ministers can change at any time if the party room of the governing party decides on a change of leadership; this has happened in Australia three times in the past 6 years.

At the July 2 elections Australians will directly elect all the members of the House in single member divisions.

Each major Australian political party – the Liberal/National coalition (a cluster of 4 registered parties) and the Australian Labor Party (ALP),  as well as the Australian Greens – will nominate a candidate in every seat.

Other minor parties will also nominate candidates. To be registered for elections, a political party must have at least 500 members on the electoral roll. As at 8 May there were 56 political parties registered at the national level in Australia (not including formally registered state branches of parties).

Independent candidates are also common in Australian elections. Every House of Representatives elected since 1990 has had at least one independent member. From 2010-13 three independents held the balance of power on the floor of the House.

Participation rates in Australian elections are very high by world standards, driven by Australia’s system of compulsory and automatic enrolment and compulsory voting. It is estimated that around 91% of eligible voters are enrolled. Turnout rates against enrolments are typically over 90%.

In recent years rates of enrolment have been a concern of expert analysts and of parliamentary inquiries, with around 1.5 million eligible voters estimated to be un-enrolled. This concern has been partly addressed by the introduction in 2012 of a comprehensive approach to automatic enrolment.

In addition, actual election turnout of enrolled voters appear to have declined slightly in the two most recent elections (2010 and 2013).

The voting method used for House elections is ‘compulsory preferential’. Voters are obliged to fill out their ballot papers with numbered preferences for all the candidates in their electoral division. Their vote is held invalid if they do not.

The electoral commission fully counts out preferences between the two leading candidates even where the winner is clear at an earlier stage of the counting.

If the two leading candidates are not already from the the Liberal/National coalition and the ALP, the Commission also determines a preferential result between those two candidatees for national statistical purposes. Including such results, ‘two-party preferred’ vote totals between the two major parties are published for each divisions, and aggregates for each of the states and for the nation as a whole are easily derived from those results. While used in analysis and commentary, these statistics have no official status and do not determine any election results.

Due to the use of single-member electoral divisions, the influence of Australian voters on national elections is not – and cannot be – equal. Voters in ‘safe seats’ which consistently return the same party’s candidate by large margins have relatively low levels of influence.

Voters in ‘marginal seats’ by contrast have high impacts on the overall election results, and on which party forms government. Major party policies, spending commitments and electoral campaigns are targeted accordingly.

At the most recent House elections (September 2013) the coefficient of variation (a measure of such inequality) for the margins of victory in the divisions was 0.69. Overall, 23% of voters held above-average influence on the election result, with around 9% of voters having influence that was twice the national average or stronger.

Being a single-member system, many voters are left unrepresented in the House that is elected. In 2013, only 42.1% of voters achieved representation in the House by a member who was their preferred choice. This is significantly lower result than can be achieved by the single-transferable vote (STV) voting system, which consistently achieves representation rates of around 80% of voters where it is used to elect the state assemblies in Tasmania and the Australian Capital Territory.

However the representation rate in the House is still a significantly better result than is achieved in other nations such as the UK, Canada and the United States, where representation rates are typically below 30% and can be as low as around 20%. The difference is largely due to Australia’s very high participation rates, discussed above.

Voters in the two main Australian territories will each elect 2 senators for terms which will match the term of the House of Representatives.

As a result of agreements reached in the course of federation in the 1890s, the Australian Senate is seriously malapportioned, with the allocations of senators being equal for each of the states (at 12 senators), despite greatly varying state populations.

The allocation of 2 Senate seats to each to the smaller-population territories, while closer to an equitable allocation, is also not proportional.

Many political parties only nominate candidates for the Senate elections, where the prospects of success are much greater.

The voting system used to elect senators in the states and territories is the highly representative single transferable vote system (STV).

Until this year, Australia had a Senate ballot paper system based on compulsory preferencing, with an alternative option of choosing a full preference ranking determined by the political party of their choice. The latter option appeared ‘above-the-line’ on the divided ballot paper, and was known as the “ATL” or “group voting ticket” option.

These two methods were changed in March this year by new legislation creating a system of semi-optional preferencing, together with a ranking-generating facility based on party groups, but without any party voting tickets. The latter option will still appear above-the-line on ballot papers.

The legislation introducing the two new methods has been challenged in the High Court, and a ruling by the Court is anticipated in the first week of the election campaign.

The new above-the-line ranking-generating option is – like the previous group voting ticket method – based on parties submitting a strict order of their candidates. This means that for the major parties, candidates placed higher on the party order are more or less guaranteed to win seats. Only the candidate ranked at the margin of the total number of seats the party will win is in danger of failing to be elected.

The election of senators in the territories, where only two seats are to be filled, is similarly problematic. The small number of seats available, combined with the prominent place of two major parties in Australian politics, means that each major party has always won one seat in each of the two territory elections. This greatly diminishes electoral completion, and in practice makes these four Senate places also ‘appointed’ in character.

The influence of voters on Senate election results, whilst imperfect, is significantly more equal than in House of Representatives elections within each of the eight voting jurisdictions. However, taking into account the malapportionment of seats, the influence of Australians on Senate elections varies greatly, with a coefficient of variation consistently around 0.80 at recent elections. Overall, in terms of voter influence the Senate is in fact the second most unequally elected parliamentary chamber in the world, behind only the United States Senate.

The Senate does feature fairly high levels of effective representation. Around 71% of voters at the 2013 elections came to be represented in the Senate by at least one senator of the party of their preferred choice. However at the two preceding elections, this result had been somewhat higher, at around 77-78%.